The Man Who Sold a Ghost 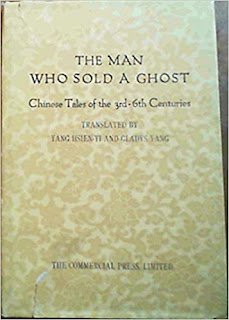 The Man Who Sold a Ghost: Chinese Tales of the 3rd - 6th Centuries, translated by Yang Hsien-Yi and
Gladys Yang

One of the fun things about working at a college library, even one as small as mine, is the interesting things you run into on the shelf.  I found this in the Chinese literature section, and the book itself is ten years older than the college is, so it must have been donated when the library was started.  It was printed in the PRC and is clearly part of a Chinese classics series meant for export and education.   This book is not rare, however, and you can easily find it used or in ebook format.

This is just a small book of tales gathered from several historical sources, so the contents are highly varied.  There are anecdotes of the doings of various emperors and sages, moral folktales about kindness to animals, honesty, and so on, ghost stories and tales of marvels.  A lot of people die and come back to life, and sometimes they tell about the land of the dead.  They are a lot of fun to read!

The title story is about a man who meets a ghost and figures out how to defeat him (more than one of these stories teaches that the solution to ghost problems is to spit on them, so keep that tip in your pocket, just in case).  The ghost turns into a goat, which the man then sells for a profit.  Ghosts and evil spirits frequently turn into some sort of animal when they're beaten.

"The Powder Girl" features a rich young man who falls in love with a girl in the marketplace.  She agrees to meet him, and

"Embracing her, he said: 'Now my wish is granted!'  In an excess of joy he died."

The girl is charged with murder but asks to see his body one last time before she is executed, and under her tears he comes back to life, so they live happily ever after.

I also liked "The Serpent Sacrifice," in which a local monster eats young girls until a plucky one takes a sword and a dog along to its cave, and kills it.  She carries the skeletons of the other nine girls out "and said sadly, 'Because you were timid, the serpent ate you, poor creatures!'  Then she made her way leisurely home."

There's a really creepy story about a boy whose father dies suddenly while they're traveling, and as the boy watches through the night, a creature with hair down to the ground and no face comes to mourn for the dead man.  As the horror-stricken boy watches, his father's body is entirely consumed, and the monster is never explained.

People wearing yellow can often be spotted as supernatural, and probably having to do with birds, gold, or both, so be nice to them.  Lovely girls in blue are probably immortals who want to marry you (and the ideal age for a girl is 15-16).  You should always be filial, honest, and kind to your stepchildren if you want to live and not die a horrible death.

One interesting thing about this collection is the preface, which was written in 1958 -- just as the Great Leap Forward was getting started, and just before the horrific famines that resulted.  Of course, the scholars who collected the tales had to make them sound properly Maoist, so they describe old customs and beliefs (Confucian morals, divine retribution, revenge) as "feudal dregs" which should be distinguished from "the genuine feelings and aspirations of the people."  They play up hatred of the upper classes and the indomitable spirit of the common people, regardless of what the tales actually contain; like so many folktales, virtue in these stories is usually rewarded with riches and high social station.

I enjoyed this little collection -- it reminds me of medieval collections of marvels and anecdotes from the West.  I think we have lost more of them, but either way, it's a pleasant reminder of how alike we all are -- in any age and any country, people love to collect ghost stories.