I first heard of this book when I started listening to a podcast called Medieval Death Trip, named in homage to this...cult classic?  I'm not sure what to call it.  It started off as a very unusual PhD dissertation in 1973, but it's sort of an experiment in immersive history. 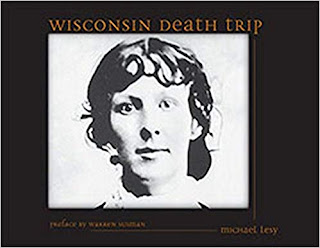 Lesy found all these photographic plates taken by a photographer in Black River Falls, Wisconsin, between 1890 and 1910 -- just piles of them.  Many were ruined by time, but he salvaged a whole lot and put the most interesting ones together for this collection.  Quite a few have been slightly altered -- trimmed, mirrored, framed or something.  There are trends: photos of incredibly elderly people in one section, little girls in dance classes in another, buddy photos and sets of girlfriends, families, and one photograph of a fellow without a stitch on showing off his physique -- from the back, thank goodness.

Interspersed with these photos are snippets from the local newspaper, usually (but not always) about deaths.  There are also snips from the insane asylum's record book, some reminisces from a "town gossip," and excerpts of prose fiction.  It piles up rather; between the accounts of people admitted to the asylum and the suicides and accidents from the paper, it gets to weigh on the reader.


Up the road were Al and Aggie Sermon.  They had a great big family, but years before it was different.  They'd got married when she was 14 or 15 and gone up to the North Woods of Minnesota, way out alone up there, and she got shack-wacky.  That's why they came back here.  She had some kind of nervous breakdown or something from being alone.  Not that she was the only one.  It happened to an awful lot of women.  [Town Gossip]

It makes me grateful to live in modern times, without the all the diphtheria and freezing to death and outright starvation.  It's also almost relentlessly depressing, so I don't recommend it if you're in need of cheering up.  Since nearly all the excerpts are unhappy ones, it eventually starts to feel like Wisconsin is the scene of doom and despair, with nobody going about their daily business.  People just wail in the streets and wander desolately.

It's a really interesting book, and as an experiment in immersive history it was a groundbreaker.  But it's a little one-sided too.