Elizabeth and her German Garden 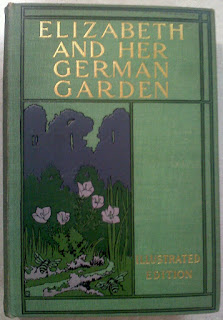 Elizabeth and her German Garden, by Elizabeth von Arnim

Elizabeth von Arnim is most famous as the author of The Enchanted April, a novel I am very fond of.  I think I would like to re-read it now.  This is actually her first book, which reads as a memoir but is really a novel I think.   She published it, anonymously, in 1898 and it turned out a huge best-seller.  From then on, her many books were billed as "by the author of Elizabeth of Her German Garden," or just "by Elizabeth."  However, debts forced her and her husband to sell the estate memorialized in the novel and move to England, and then the husband died in 1910.  Elizabeth moved to a chateau in Switzerland, had an affair with H. G. Wells, and hung out with clever people.  A disastrous second marriage (to Bertrand Russell's brother Francis) ended in separation, as she fled to America in 1919.  She spent the next two decades in various parts of Europe, until she moved to America and lived there for the last couple years of her life, dying in 1941.

As I said, this reads like a memoir.  It's just Elizabeth's narrative of her life in this rather isolated German estate; she goes ahead of the rest of the family, to put the house in order, but regards the house as very secondary to the garden, for which she has plans and ambitions.  If at all possible, she will spend the whole day in the garden, hoping nobody will bother her.  As the family arrives, she often has her three small daughters (the April, May, and June babies, as she calls them) with her.  People visit; one is her best friend and enjoyable, others are foisted upon her and provide exasperation or entertainment.  (The solution for truly exasperating people is to take them on a summer picnic at the Baltic coast -- which is incredibly beautiful, but also overrun with mosquitoes.)

It's a lovely, pleasurable, and relaxing read, with the exception of the husband, who I hope was nicer in real life than she let him be in the story.  It's an odd portrayal, which mixes affection and annoyance...but he doesn't come off all that well.  Maybe it worked better in 1898?

I can't decide whether this is English or German literature.  It's both and neither.  Von Arnim is an Englishwoman living in Germany, and while she likes it that way, she's kind of prickly about both lands.  She portrays herself as not very good at enjoying company or other people all that much.

I could really see the roots of The Enchanted April, so that was interesting too.  I did enjoy this one a lot, but there was a fly in the ointment.

My copy is a slightly elderly Virago paperback.  I can't find a link to a decent real-life edition on Amazon, but the Kindle version is free.
memoir/biography TBR challenge