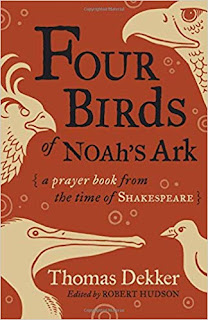 Four Birds of Noah's Ark: A Prayer Book From the Time of Shakespeare, by Thomas Dekker

I've never been a big Thomas Dekker fan, because the first thing I read by Dekker was his version of Patient Griselda, which is about as calculated to offend modern sensibilities as it could possibly be, and while I am pretty easygoing about historical perspectives, I would have been just as happy if the Patient Griselda story had never been invented.  Apparently I should really read some of his other, less horrifying plays.

By all accounts, Dekker was not a particularly religious man, but he did live and breathe in an atmosphere more saturated with religion than we can easily imagine, and he spoke the language of devotion fluently.  And in 1608, when plague was ravaging London, he wrote a book of prayer-poems for the people of England.  There is something for everyone here.

The book is divided into four parts, named after four birds.  First, the Dove presents poems for ordinary people with ordinary difficulties -- the humble and the hard-working and the poor.  Here we find prayers for schoolboys, wives, laborers, sailors, and maids.

The Eagle has prayers for those in power, or with stewardship over others, starting with Queen Elizabeth herself (who was gone by 1608 but got a prayer anyway), every station of royalty and government, clergymen, magistrates, and so on.  Then there are prayers for the country as a whole for times of pestilence, war, and disaster.

The Pelican, as a symbol of Christ's self-sacrifice for the benefit of humanity, presents prayers that ask for defense from the seven deadly sins -- one prayer each! -- and from temptation in general.

The Phoenix is a symbol of Christ's death and resurrection, so these are prayers of thanksgiving for various aspects of the Atonement.

They are lovely poems, and quite enjoyable to read, though I'm not very good at poetry.  This edition has been a bit modernized; the spelling is modern and I think the editor probably made the language just a little easier, because it really is meant as a devotional book for people to understand and meditate upon.  It's also a pleasure to look at, with nice printing and art.  A nice reading experience for me.