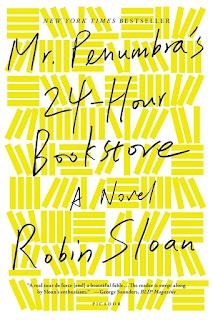 Hello summer!  I finished my semester at work about 10 days ago, and I thought I would relax and take it easy for a few days, but the universe had other plans and dumped a bunch of random stuff in my lap.  I can't even remember what, but it sure kept me busy.  Now $20booksofsummer has started, and I have six books waiting to be blogged about, all of which I started before June 1st.  So I'm going to play a bit of catchup here...

My neighborhood has a Little Free Library, and I found this novel in there one morning.  I was skeptical that it would be any good -- novels about bookstores abound, after all -- but I didn't quite want to not read it.  The book startled me quite a bit by glowing at me in the dark after I'd gone to bed; all the books on the cover are printed in glow-in-the-dark ink, on the spine and the back and everything.  And once I got into it, I found that I was pleasantly surprised by this very fun, beguiling novel.

Clay is an up-and-coming young designer in the Bay Area until the 2008 recession hits him hard and the startup he's been working for* fails.  Desperate for work, he lands a spot as night clerk at this 24-hour bookstore, where almost nobody buys books.  Instead, odd people come in and borrow mysterious books from the back room.  The books are encoded; what are these people up to?

Clay ends up with a team of friends -- Kat, the Google genius he loves, his roommate the model builder, his best friend and software millionaire Neel, and eventually Mr. Penumbra himself -- working on solving the antique riddle set by Aldus Manutius himself.  Kat figures the power of the internet can solve anything!

This was such a fun scavenger hunt novel.  Also it's much better written than The Da Vinci Code, which apparently it has been compared to.  Yes, there is an old puzzle and a scavenger hunt, but those are the only resemblances.  Sloan deliberately occupies a space at the intersection of technology and antiquity, and he has a great time doing it.  I would have expected him to do it really badly, but no!  it's so entertaining and witty and...fun!

There were some really good jokes and descriptions of the techie life.  I insisted that my husband sit and listen to me read him a description of various coding languages (C, Ruby, etc.).  Here are some other favorite bits:

Neel made his millions in middleware....He sells tools they cannot do without -- tools they will pay top dollar for.  I'll cut to the chase:  Neel Shah is the world's leading expert on boob physics.

Neel takes a sharp breath and I know exactly what that means.  It means: I have waited my whole life to walk through a secret passage built into a bookshelf.**

You know, I'm really starting to think the whole world is just a patchwork quilt of crazy little cults, all with their own secret spaces, their own records, their own rules.


Also, I suspect that the Emeryville-based "California Museum of Knitting Arts and Embroidery Sciences" is a jokey expansion of Lacis in Berkeley?

So, just a giddy romp through the meadows of bibliomania and techie dreams, and great fun.  Oh, and guess what, there's a novella prequel as well, easiest to get on Kindle for a couple bucks.  I just got it.

**We all have, Neel.  We know exactly how you feel.
books TBR challenge