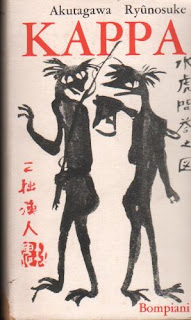 The poet Akutagawa, who suffered from mental illness or depression for most of his life, wrote this novella in 1927 at top speed, in just a couple of weeks.  He did this right after his sister's husband committed suicide, leaving him to straighten out a terrible financial mess.  The story was written out of his disgust with life, the world, and most of all with himself.

This is the narrative of patient #23 in a mental hospital: he met a kappa one day and chased it, falling into Kappaland.  He had to join Kappa society, learn to speak, and make friends.  After a year or so, he became disenchanted with Kappa life and found a way back home, but now he wants only to return, and he describes his friends and Kappa society to anyone who will listen.

When a Kappa is about to be born, the father yells in to it and asks if it really wants to be born and exist, warning it to think carefully.  The child in the story answers:  "I do not wish to be born.  In the first place, it makes me shudder to think of all the things that I shall inherit from my father -- the insanity alone is bad enough.  And an additional factor is that I maintain that a Kappa's existence is evil."


The poet Tok is Akutagawa's self-portrait -- he has strong views about art and considers himself a super-Kappa (just as every Kappa artist does; they all like Nietzsche I guess)  He kills himself and haunts his house, wanting only to know if his work is now admired as it ought to be.

In Kappaland, the ladies do all the pursuing and the men run away as much as possible.  Books are published from a ground grey powder, and workers who lose their jobs are eaten.  While this story is something of a fable, it's also very obviously a vicious satire of ordinary Japanese life.

It's an absorbing little novel, and very very short -- I actually read the whole thing while sitting at the airport waiting for my flight.  Give it a try!