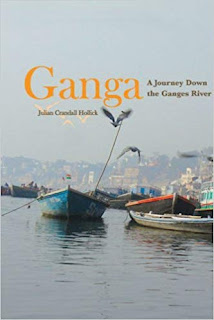 Ganga: A Journey Down the Ganges River, by Julian Crandall Hollick

This guy Hollick, who has spent much of his career in radio explaining India to the English-speaking world, as far as I can tell, decided to take a trip down the Ganges to look at the river as a whole.  Except you can't actually do that; it's impossible to just start at the top and go all the way to the sea, for several reasons*, so he just did his very best to travel the length of the river in a few stints.  On the way, he describes the cultural and religious importance of Ganga, and studies some of its many difficulties -- environmental, industrial, and biological.

There are some problems specific to Ganga that are very difficult to solve.  India's massive appetite for power means that flow is frequently diverted to generate electricity, to the point that the river gets too small in places (happily constantly refreshed by new flow from tributaries).  Irrigation takes even more, and then there's the pollution.  Massive amounts of raw sewage and industrial effluvia are dumped in, and waste treatments plants are often in disrepair or rendered ineffective by improper treatment.

The amazing thing is that Ganga is as healthy as it is.  It doesn't seem possible, and yet the river actually does end up cleaner than it ought to be.  One key seems to be bacteriophages, and there's a large section on that.

Still, the demands on the river are unsustainable.  The Ganges river dolphin is endangered, there are dams and barrages in places that don't work and end up exacerbating the flooding they're meant to control, and too much water is taken out.  Hollick tries to be optimistic, but it's not easy.  Since the book is a little over ten years old, I really would like to know what's going on today in some of these spots.

A more enjoyable aspect of the book is the description of the beliefs and practices surrounding the river.  Hollick records stories about Ganga from as many people as he can get to talk with him, and it's enthralling.  I would have liked a bit more about that, but in fact there was plenty.  (The day after I finished the book, I was listening to a podcast by a British woman who asserted that the Thames is the most storied river in the world.  No, it very definitely is not.  That would be Ganga, and probably the Nile after that.)

A very interesting book about an important topic.  I only wish it was less than ten years old.