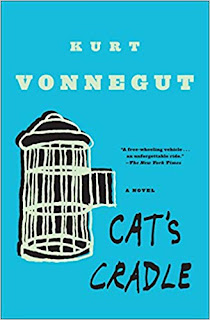 Funny that I should read two books practically at the same time that use the cat's cradle game as a theme.  I wound up getting out this old Dover book I have about 'string games around the world' only I can't find the yarn to try them out.  I'm sure there is yarn around here someplace...


Anyway.  Cat's Cradle is a nice read.  The narrator tells his story, starting with his project of writing a book about what was happening in America on the day that the bomb was dropped on Hiroshima.   But now he's a Bokonist, and he's had some adventures with his friend Newt, whose father was one of the major physicists working on the bomb.  That father also invented ice-nine, and Newt and his siblings have some.

Bokonism is, I think, the famous part of this novel, and it's where the notion of a karass comes from.  The novel I'd read before made me think a karass was just your band of mates, but it's not; it's the other people chosen to do the same job as you on earth, in an ineffable sort of way.  You don't have to like them, or know them in person.

The other famous part is ice-nine, which my husband knew about although he's never read Cat's Cradle.  That was a pretty good bit, but I wouldn't want to spoil it.  In fact I'm having trouble writing this post without telling the whole plot, so this isn't turning out to make much sense.

Still, I enjoyed the book a lot and I shall perhaps read another few Vonnegut books soon.  I've never read anything besides the standard Slaughterhouse-five and Harrison Bergeron before.
20 books of summer American literature modern fiction