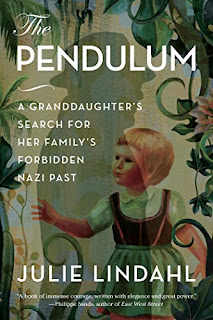 The Pendulum: A Granddaughter's Search for Her Family's Forbidden Nazi Past, by Julie Lindahl

Not so long ago, I read Belonging by Nora Krug, about a German woman's search for her family's past and her fears about what she might find.  Krug's journey ended in a bit of relief; for the most part, her grandparents hadn't done anything much.  Julie Lindahl, however, found some really terrible things in her family's history, and this is her memoir.

Julie Lindahl, who is just a few years older than I am, was born in Brazil to a German family.  That fact in itself contains a lot of information, but Lindahl grew up -- mostly in Europe -- without knowledge of what it might mean.  Her family's silence about the past was complete, even as it warped all their relationships; they thought they should not burden the future.  It didn't work.  Little Julie, even as a tiny child, felt that she herself must be somehow guilty of the worst crimes, though she did not know what they could be.

As a young woman in her 20s, Lindahl started to realize that her grandparents must have done something during World War II.  It took many years to unearth the truth; her grandfather had died in Brazil, and her grandmother maintained a steadfast refusal to acknowledge the past as it had actually occurred.  She would reminisce about their lovely estate in Poland without admitting what had happened -- though her ongoing nightmares and nervous tics told their own story.  Everyone told Lindahl never to ask.

So Lindahl had to find out almost everything on her own, through government records and historical sources, finding the other people who knew the history and were willing to take her to the sites.  Visits in Poland and Germany eventually turned into trips to Brazil -- Lindahl even found her uncle, who was not dead at all.  Facing the past brought Lindahl a lot of pain, but also healing -- sometimes of her family relationships, but also new family to love and understand, friends who helped, and many kindnesses.

This isn't just a fascinating story of tracking down history.  It's also a meditation on oppression and cruelty, forgiveness and healing -- how to face the past and deal with it, so it informs the future without burdening it unduly.  I'm very glad I could read it.