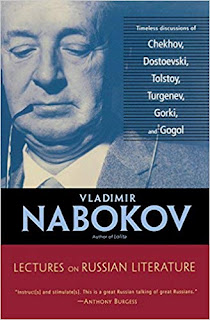 A few years ago, I read Nabokov's Lectures on Literature, which covers several English and French authors (Dickens, Proust, Austen...) and is a very enjoyable read, though Nabokov is weirdly anti-women authors and really doesn't like Jane Austen at all except for Mansfield Park, which he thinks is wonderful.  I also wanted to read this collection of lectures on Russian literature, but I felt like I ought to know more about Russian literature before I did.  Now that I've read a bit of all the authors he covers (though of course not as much as I would like), I felt like I could tackle this.

We start with Gogol, and I got a lot out of that chapter.  I would like to re-read Dead Souls now, armed with some of the insights I got.  The Turgenev chapter is similar and I want to read more Turgenev.  (Odd fact: Turgenev admired Bazarov in Fathers and Sons, and was bewildered by the general reception of his character.)

Tolstoy, though...the wonders of Tolstoy take up a very large chunk of the book.  Mostly it's focused on Anna Karenina, but just about everything gets a nod, and "The Death of Ivan Ilyich" is also covered in depth.  Nabokov cannot say enough about the genius of Tolstoy.

After that there is a very nice bit on the particular genius of Chekhov (I really must read more Chekhov) and a very short chapter on Gorky.

I took this book on the trip to Portland, and my sister-in-law, who is Russian and a literature major, spotted me with it.  She gleefully asked me if I'd gotten to the part about Dostoevsky and proclaimed her agreement with Nabokov.  She's a Tolstoyan too and I have sometimes commiserated with her on the awfulness of casting Keira Knightley as Anna Karenina.  Someday I'll catch up and be able to discuss Tolstoy properly (don't I wish, ha).
20 books of summer literary criticism TBR challenge