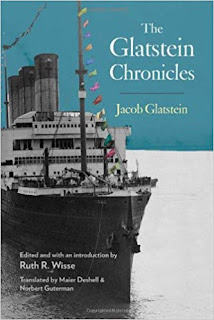 The Glatstein Chronicles, by Jacob Glatstein

This book took me so much of the summer to read!  I enjoyed it a lot, but it's a long and complex read.  Definitely worth it, though!

Jacob Glatstein was a Polish Jew who came to the US at twenty and made a career in journalism.  At forty, in 1934, he traveled back to Poland for the first time to see his dying mother.  The trip inspired two autobiographical stories written in Yiddish (he planned a third) and a determination to warn American Jews about the dangers Hitler posed in Europe.  He spent the next several years hammering away at his message in Jewish publications, frustrated by the lack of response.  The Chronicles contains both memoirs.

Volume I, "Homeward Bound," is entirely about the trip to Poland.  Glatstein spends much of the trip spotting fellow Jewish people and sounding them out about Hitler, but he has plenty of time to talk about everybody else, too.  Volume II, "Homecoming at Twilight," is about his stay in Poland after his mother's death.  He never speaks of her or of the rest of his family; that may have been the subject of the planned third book, but I'd bet it was going to be about the trip home.  These are described as autobiographical novellas, and I don't know how fictionalized they were, but Glatstein mostly leaves himself and his family out of them.

Instead of talking about himelf, what Glatstein does in both volumes is talk about the people he meets -- what they're like, what they say and eat and do, what they think.  They are comprehensive portraits of life aboard ship (or the train) and then of pre-war Jewish life in Poland.  As a result, the book is more like a series of vignettes and portraits than it is like a story, but the portraits are all detailed, vibrant, and individual, and they show a way of life that was wiped out only a few years later.

It's an excellent choice for anyone interested in Jewish history or Yiddish literature, but it's a fairly heavy-duty book, so plan accordingly.