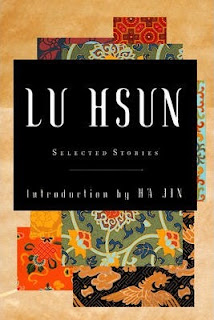 For quite some time I've been wanting to read Lu Hsun (or Lu Xun, as some of the older books in the library have it).  I know very little of Chinese literature, but I know that Lu Hsun is one of the most influential writers around.  He seems to have written mostly essays, believing that it was his responsibility to influence politics and advance the liberation of his people from feudalist tradition and capitalist oppression (he wasn't exactly a Communist, but he was sympathetic to them).  However, he was also interested in the literatures of oppressed nations and was an admirer of Adam Mickiewicz among others (I recently read Mikiewicz's epic, Pan Tadeusz).  Lu Hsun also wrote short stories, which are usually lauded as groundbreaking in Chinese literature and perfect specimens of their kind.  So I was pretty excited to read some.

These stories are of everyday life, often from the point of view of an impoverished scholar who can't find a job, or who just scrapes by.  They are set in rural villages and feature peasants and servants, and are very realistic for the most part (actually, the one I liked best was a reworking of an old myth).

I'm afraid the stories may be victims of translation, or else I just didn't get their genius.  They were fine, and I enjoyed some of them, but whatever wonderful quality it is that made them such landmarks in Chinese literature, I couldn't really grasp it.  I'm glad to have read them, and I will probably try to read an essay or so in the future, but I think a lot of their original art may have been lost in translation.
20 books of summer Asian literature read around the world