A Sister to Scheherazade -- WIT Month and Summer Book 20 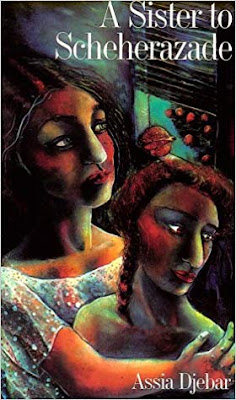 A Sister to Scheherazade, by Assia Djebar

August is Women in Translation Month, the time of year when Meytal Radzinski at Bibliobio talks about books by women in translation -- mostly, but certainly not entirely, in the Anglosphere.  The fact is that despite plenty of interesting, intelligent literature written by women in every language, the stuff chosen for translation tends to be much more by men -- who, yes, also write interesting and intelligent literature, but the parity could easily be much better.  Radzinski has recommendations, statistics, and plenty of information available at Bibliobio, so go check it out!  I'm always interested to see what she has to say, and her recommendations are very helpful with my Reading All Around the World project (I have not really paid much attention to gender in choosing my books, but since my tastes do run more to women authors than men, I think I might start to some extent.  I'm finding that frequently, if I choose a book based only on its country of origin, I get a Guy novel that is not to my taste.)

But!  When I chose my 20 Books of Summer list, I didn't think about WIT Month at all -- plus I chose a lot of books I've been putting off.  And nothing on the original list fit the WIT requirements.  I would usually just choose an extra title, but I did so much travelling and not-reading that I wound up out of time and had to switch some books out.  So I poked around on my library and TBR shelves and found some candidates: 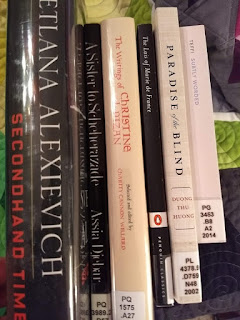 Two Russians, two medieval French, one Vietnamese and an Algerian.  I decided to go with Assia Djebar, whose first book in the quartet, Fantasia, I read a few years ago.  My goal is to track down the entire quartet, which has not been all that easy.  The third is So Vast the Prison, but I have not yet figured out which of Djebar's books is the fourth.  All seem to probably be novels that chronicle women's lives, but in a fragmentary style.

A Sister to Scheherazade is narrated by Isma, with alternating chapters in the first person, about herself, and the second person, about Hajila.  Isma is passionately married; Hajila is newly married to a man with two children, and she is frightened about the whole thing, but she's also secretly going out during the day and removing her haik, the all-enveloping white wool robe that Muslim women often wear in Algeria.  It takes some while for the reader to realize that Isma is the first wife, who has left, and Hajila is the second wife that Isma chose.  Isma also spends time remembering the women she knew in the past and telling their stories: a girl married off to an older, sickly man, who is ruined by malicious and ill-founded gossip, a talented embroideress who has prepared a lavish trousseau and then marries a man from a village where weddings (and wedding nights) must be incredibly ascetic.... all these women can meet at the hammam, the Turkish baths that are hugely significant to women who live in isolation from most of the world.

Djebar's writing is not always easy for me to understand, but it's well worth the work of slowing down and figuring it out.  She really draws the reader in to the situations and environment she's writing about; it's very immersive even if it isn't always easy.