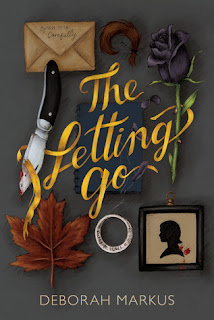 The Letting Go, by Deborah Markus

Apparently I'm at the age where all my friends start writing books.  This is the fourth or fifth recent book by somebody I know -- even if I only know this author virtually.  I got to know of Deborah Markus when she was publishing a wonderful magazine, Secular Homeschooling, several years ago, and now we've been Facebook friends for some time.  I saw her research and write and pitch this YA novel, and as soon as it was published I put it on hold at the library and checked it out.  So I did not receive a free copy of this book in exchange for an honest review, but I'll give you an honest review anyway.

Emily lives at a boarding school, the open-structure kind for kids who want a lot of time and space for working on their own projects.  Despite living with twenty other girls 24/7, she is not friends with any of them.  Emily pushes everyone away and never forms relationships, because she knows that everyone who gets close to her will die, murdered by whoever it is that decided that she doesn't get to have a family or friends, or even a pet.  Instead, she is friends with Emily Dickinson, whose words seem to say the things that she can't communicate.  When a murdered man shows up on the school's doorstep, Emily knows that it has to be a sign for her, even though she never met the guy.  And then this new girl doesn't seem put off by Emily's deliberate rudeness.  Emily is certain that making a friend (or more?) will only get somebody killed, but how to stop this girl who is so stubborn?  Besides, she's so lonely.

The novel is written as Emily's diary, mostly in little shortish entries that begin with a line of poetry from Emily Dickinson.  It can get really broken up, especially as Emily gets more distressed, so it's important to pay attention, but it's always possible to figure things out, even if it takes a little while.  I was wondering how the mystery could possibly be resolved, and the suspense is pretty terrific, but it does become clear and has a satisfying conclusion.  I thought it all came together really well.  Markus is also just a good writer -- she's not clichéd or muddled or bland, but clear and thoughtful and just good to read, and the Emily Dickinson obsession is an integral part of the story, not tacked on.  YA fans should pay attention, and also Jenny at Reading the End would really like it, I think.
20 books of summer mystery YA lit