The Nordic Theory of Everything 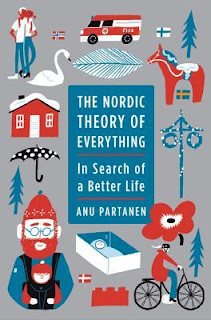 The Nordic Theory of Everything: In Search of a Better Life, by Anu Partanen

Remember how a few years ago, Finland was everybody's idea of a perfect country?  Finnish education was the best!  Scandinavian government was the tops!  Right about then, Anu Partanen was moving from Finland to the US, because she'd fallen for an American and it seemed to make the most sense for her to move.  She was surprised to see Americans holding up Finland as an ideal, because Finns are notoriously pessimistic and find this puzzling at best, but as she got used to living in the US, dealt with culture shock, and found many things to love about both countries, she thought she might share a few ideas about what works (or not) in Scandinavia.  Buckle up, people; I have THOUGHTS.

Now, I spent over a year living in Denmark, so I'm pretty familiar with a lot of the stuff people talk about when they laud the Nordic lands.  And while I love DK, I've also got some of their attitude about the glorification thereof; as my host sister once said, "Det er ikke nogen eventyrland."*  I find hygge-hype weird and silly (and nobody can pronounce it either).  I'm also hugely skeptical about the logistics of putting Nordic ideas into practice in a country of over 300 million people.  I live in California; the SF Bay Area alone has more people in it than Denmark does.  How is universal health care supposed to scale up to that, even if we go by state?**

But I dived in anyway.  I took a break about halfway through because it was so depressing.  Man, life in Finland sounds pretty good in a lot of ways.  Easy taxes, preschool and old folks' homes for all, schools that are all funded at similar levels (and yet have teachers with a lot of autonomy), and medical care for everybody.  This is not to say that it's all perfect and Partanen thinks the US is terrible -- she is in fact now a US citizen, and spends a lot of book-time pointing out American strengths.

What Partanen mostly does is talk about "the Nordic theory of love,"  how that translates into societal values, and how it's really not very different from American ideas.  Her claim is that the Nordic theory of love is that love is really only possible between fairly independent and autonomous parties who can choose freely to enter into a relationship.  Imbalances of power mess with relationships and limit freedom.  This turns into a belief that every kid ought to have about the same opportunities for education, that it shouldn't matter what your family's income is.  (Well, Americans think that too, don't we?  But we've wound up with this bizarre system where our property taxes go to the local schools (CA says: it's complicated), so some schools are rich and some are poor, so we spend a ton of money to get a house in the right district, and it keeps getting worse and more expensive.) Patanen's claim is that the Nordic system is very much in line with American values, while the American system frequently works out in a way that doesn't support the values we hold.

Partanen correctly points out that the Scandinavian governments are not, in fact, socialist.  They are capitalist countries that put a lot of resources into social welfare programs.  Nordic countries have put a lot of effort into being business-friendly; it's quite easy to start a business in, say, Denmark, and tech is big there.  Businesses don't have to spend any resources managing their employees' health insurance or medical/family leave, and nobody has to stay in a job they hate because they need the benefits (plus, think of all the medical money that goes to insurance paperwork and billing complexities).  Entrepreneurs can start businesses without worrying about health insurance.  It is entirely possible to get rich in Scandinavia, though getting mega-rich is not so easy.  And paid leave, as well as many other benefits, are scaled to income, which is an incentive to get an education and a good job in the first place.

She also nixes the idea that Scandinavians go for a social welfare society because they are particularly charitable.  No, Nordics like the system because they see it as working in their own interests and to their direct personal benefit.***  They pay about the same amount as we do, but they feel that they see more bang for their kroner.

Which is pretty much where I think the disconnect is for Americans.  Americans do not see the US government as beneficial to themselves, and they are skeptical that the government is capable of running social programs without massive waste and incompetency.  Maybe Finland is small enough that it is less full of pork?  Partanen even says that the Finnish government had a long period of trimming and reform; they also have strict rules about staying under budget.  That sounds like a fairy-tale to an American.

And here's another thing: at no point does Patanen mention American military spending.  Our federal budget does put a lot of money into Medicare, Social Security, and other things (not much into education, which is largely a state concern).  But it also puts about 16% (of total 2015 spending) into the military, which is much, much larger than any Nordic country does.  And while we get beaten up a lot for this, we also can't easily stop or get out of our role as the world's police officer.  Russia and China are both looking to expand, and while we may be bunglers at best, they're worse.  (And just the other day I heard a guy on NPR say he couldn't understand why the West isn't going after ISIS properly.)  Perhaps those European countries could step up their contributions?

So that's some of the governmental stuff she talks about that I wanted to address.  In a different direction, Patanen also talks about cultural standards and what she thinks are the pros and cons of each.  What I was particularly interested in was Janteloven; I have yet to see any Nordic commentator refrain from talking about Janteloven!  It's actually a set of 'rules' from an old novel that all Nordics recognize as putting a finger on a particular strain of their cultural character.  You'll have to look up the whole thing, but the first rule is "Du skal ikke tro, at du er noget."  "Don't think you're somebody."  You have no idea how snotty that can sound in Danish.  This is not really something that they consider to be a positive trait.  I'm always interested in reading about it, so I liked that.

America is in a mess.  Our costs for higher education and medical care have spiraled so high that it's perfectly possible to be financially ruined by them.  I think most of us are worried about money most of the time, and a lot of us have real and ongoing fears about it.  The middle class can no longer afford these costs.  Nordic countries have taken those worries out of the equation, which sounds like a beautiful, impossible dream to any American.  Personally, I'm ready to sign up, but I can't see how it could happen in our giant system.

And there are some trade-offs.  I didn't talk about higher education, which is free in Scandinavia (and comes with a student stipend, so that parents have no expectation of supporting their children financially after 18).  But the schools also have tracking, which Americans hate. The pragmatic, streamlined, job-focused Nordic system is very much at odds with the patchy but romantic American vision.

Oh well, maybe I could just brush up my Danish and move.  I've already got Christmas down!  I can make julejherter with the best, believe me.

*It's not some fairy-tale land.

**  That said, 2017 was, medically speaking, very expensive for our family, and not that much even happened.  We have huge problems with medical care here and I for one am entirely ready to move to Finland.  I just don't see how to do it in the US.

***  I agree that it's wrong-headed to claim that, say, universal health care should be brought in because it's the Christian or charitable thing to do; opponents then correctly counter that it is not charitable to use tax money for social programs.  Charity involves opening your own wallet.  However, you can make a perfectly good argument that doesn't involve charity.
non-fiction politics