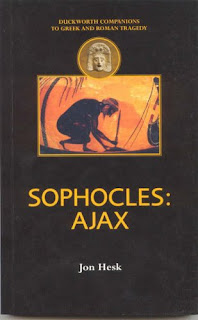 I really needed just one more classic for a challenge, and it was a tricky one -- an award-winner, published before 1967.  But I wasn't in the mood for a Pulitzer or a Newbery, and prizes weren't being given out in most of my favorite historical periods.  What to do?  O gave me the answer: a Greek play!  Sophocles never got less than second place.  So I picked a play I'd never read before, and voila!  An award-winning classic.

Poor Ajax.  He's the strongest and most mighty warrior around, but his pride has been hurt.  Achilles has just been killed, and Odysseus and Ajax both claimed his armor.  In the argument, the wily and smooth-tongued Odysseus naturally managed to convince all of the Greeks that the armor should be his.  The play opens after this; Ajax feels he's been dishonored, and he has every intention of killing not just Odysseus, but the leaders of the expedition who allowed the whole thing to happen.  Athena, however, is none too pleased with Ajax, and so she puts a madness upon him; he slaughters all the sheep and cattle, thinking that they are the Greek leaders he hates.

Once awake, Ajax laments his terrible fate and determines to kill himself.  His whole household turns out to beg him to live, but he eventually manages to sneak out and fall on his sword.  The household laments and prepares his body for burial, but Menelaus and Agamemnon arrive to forbid the burial in vengeance for Ajax's murderous intentions -- and his general inability to get along.  Odysseus, however, argues that it would be dishonorable to take such revenge on a dead man, even his worst enemy; and after all, it's better to treat the dead well so as to keep in with the gods and earn a good burial, since death comes to all.

This play is all about the dissension within the Greek camp.  Nobody is getting along, and everyone treats other Greeks like enemies instead of allies.  Here they are, fighting against Troy, but Troy is hardly mentioned. The heroes are fallen and degraded.

By the way, have you ever wondered why there's a cleanser called Ajax?  Well, just think....Ajax was stronger than all Greece....
drama Greek classics