A badly wounded soldier, near death, stumbles into a mostly-deserted manor house.  The only people there are Salomea, a young woman whose father is off fighting, and an elderly cook.  They take the soldier in and hide him during his long, slow recovery. 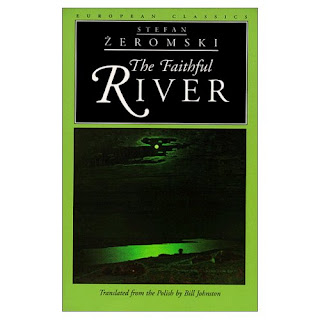 The novel, published in 1912, is set during the Polish uprising of 1863 and 1864, when Polish volunteers fought the Russian occupation of the eastern part of the country.  Poland didn't technically exist at this time, having been carved up and shared out between Austria-Hungary, Russia, and Prussia.  The novel is set in what is now south-central Poland, the Kielce region, and I think the river must be the Vistula.  The reader doesn't need to know a lot of this background, but a little bit is helpful.

Josef Odrowaz is a dashing young nobleman -- or he was, before the Russian troops slaughtered every wounded man on the battlefield.  Now he is only barely alive, and the locals dare not help him.  Salomea takes him in, but troops arrive at her house every couple of days, demanding food she doesn't have and searching for hidden rebels.  As Josef recovers, he and Salomea fall in love.

The river runs near Salomea's home and though it does not appear all that often, it proves itself to be more faithful to the Polish cause and to those to run to it for shelter than flawed human beings are.

It sounds like a simple plot, but in fact the novel is quite complex.  Stefan Żeromski examines the contradictions of the uprising and the war -- the Polish struggle for independence that is idealistic in concept, but brutal to the actual Poles.  Salomea is faithful to the Polish fight for freedom at the same time that she rails against its leaders for being so idiotic as to start a doomed uprising against a massive power like Russia.

The introduction to the novel says that Stefan Żeromski is venerated in Poland as one of its great novelists, but isn't well-known in English.  He's certainly worth searching out and reading.
Eastern European literature read around the world