By Jean - December 10, 2017
I missed last week, even though I meant to write; I mean to write a Sunday post and then the next thing I know it's 7:30pm and I'm tired! Anyway, this is Jenny's weekly event where we list things that got us through the week.

I had a pretty tiring week, really, because I tackled my annual chocolate project.  I've downsized it considerably, because I'm too tired to do more, but I did dip a lot of almonds and marshmallows.  I felt hugely short on sleep all week, but today (after something resembling a decent night's sleep) I feel much better.  And I do love chocolates.  Just the scent is something else!

We are slowly but steadily getting ready for Christmas.  We don't put up a tree until later, but I did get the Advent calendar out on the first.  One Danish thing I just have to do every year is an Advent candle, where you burn a bit every day.  But I couldn't find the brass candlestick I set it in!  I think I must have packed it into a Christmas box instead of putting it with the candles.  But I just HAD to find something to use as a candlestick...and that, my friends, is why my cute Advent candle is set into a gargoyle candleholder.  So Christmassy, isn't it? 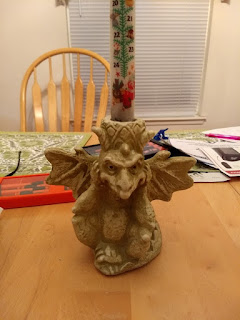 Friday night I took my kids to a holiday concert, put on by the local symphony and a college choir.  It took place at the local Episcopalian church, which is a familiar spot for my kids as we have friends there and they did Vacation Bible School there for years (featuring science projects, because why not?).  My 17yo daughter had spotted the ad for the concert; otherwise I would not have known it was even happening, and I'm so glad we went.  The music was fabulous and ranged from cantatas and oratorios to kind of random classical selections to familiar carols.  It ended with probably the best carol sing-along I've ever been to in my whole life.  We're going to have to do that again!

The conductor told us a funny story, though.  Last month the symphony performed Stravinsky's Firebird -- in fact the 17yo and I went -- and he video-recorded one session (the one we weren't at).  The resulting video went viral:

Some poor lady was startled out of her wits, I guess!

Yesterday I took a friend of mine, who hasn't lived here long, on a tour of our town founder's mansion.  It was really fun.  I've been there lots of times, but I haven't been on the whole tour in several years, and the guide really knew her stuff.  She grew up here and actually saw the renovations being done when she was a kid.  The mansion was used as a college dorm and teaching hall for many years, and was just falling apart when people got together to purchase the house and preserve it as a historical monument.  We had a great time and then went out for sandwiches and plotted more local sight-seeing.

Another really nice thing happened yesterday too.  My older kid's glasses broke a few weeks ago, and we had to fix them with a sort of blob of Sugru, this moldable glue, until we could get her a new prescription and order new glasses.  Our friend, an ophthalmologist, squeezed her into a Saturday morning before his surgeries started, and now her new glasses are on the way.  It was just such a kind thing for him to do!  And now we will order a back-up pair...