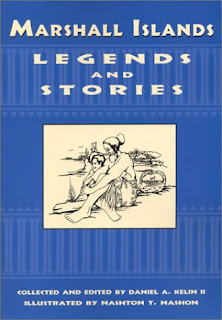 I lifted this title straight from Ann Morgan's project list, since there aren't a lot of Marshallese writers.  But I was extra-excited about this one anyway.  For one thing, I just like collections of folktales.  They are pretty well irresistible to me.  (Possibly this is a thing for most librarians?)  Plus, one of my very good friends lived in the Marshall Islands for a couple of years at about the same time that these tales were collected, in the early 1990s.  She speaks Marshallese and I'm going to lend her this book tomorrow, now that she's done with the semester and has some time to indulge in fun reading.  I think we're both sort of hoping that she'll recognize one of the storytellers as somebody she knew, even though that isn't really very likely.

In the Marshall Islands, storytelling is sort of an official calling.  You have to get permission from the iroij, the chief, to tell stories: "By custom the iroij own the legends, and the ones who are chosen to remember them can share them only when the iroij says so."  Some of them can only be told under special circumstances.   So Kelin was very fortunate to be able to hear a lot of stories.  He organizes them by geography, and each storyteller is profiled (often with a photograph, which is great) before their stories.

This is a nice collection, and it's only a selection of legends, not all the stories Kelin was able to collect.  Many of them, of course, are about how to behave properly and what happens if you don't.  Or there are mischief tales.  Others explain why things are the way they are, and they're very local; the storyteller can point to a landmark and explain how it got there.  I particularly liked one story that explained why the women from a certain island can fly when they are sad.

One tale reminded me of Cinderella (known the world around!); a little boy's mother died and his stepmother was cruel and didn't feed him, so his own mother arrived in the form of a white bird and took him away.

Kelin left in a lot of the language; every time somebody calls out or sings a little bit of verse, it's left in and the translation given.  This is really nice, since it gives the reader a lot of flavor that would otherwise be lost.  There are notes along the sides to show pronunciation and meanings, and a word list at the back.

A great collection of legends and folktales.  Good stuff.
folklore Oceania literature read around the world