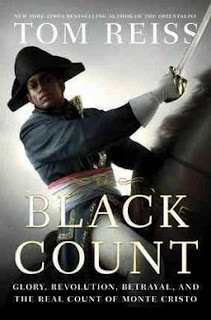 The Black Count: Glory, Revolution, Betrayal, and the Real Count of Monte Cristo, by Tom Reiss

This book is fascinating!  I've never been all that interested in French history, but I'd heard great things about this book, and it was sitting there on my TBR shelf when I started reading The Man in the Iron Mask.  I thought they'd be good to read together, and indeed it was; The Black Count more than lived up to expectations.  It's a Pulitzer Prize winner too, so you don't have to take my word for it.

Alex Dumas died when his little boy was only four, and that boy spent the rest of his life idolizing his father.  You could hardly find a more heroic father even without the rose-colored glasses, and Alexandre Dumas wrote his father's experiences into many of his stories, eventually turning Alex into Edmond Dantes to imaginatively take revenge on the enemies who brought him low and then made sure that France forgot him.

Reiss starts with the sugar cane plantations of Saint-Domingue (now the Dominican Republic and Haiti), which ran on a particularly savage form of slavery; it was actually part of the business model to work people to death and then replace them with fresh captives.  Sugar was hugely profitable, and a major source of French wealth.  Alex Dumas' father was a ne'er-do-well minor nobleman who married Marie-Cessette Dumas, a black woman, but then later sold her and their children (including Alex, but with a caveat that he could be bought back).  Alex ended up free and a young dandy in France, where he was a social hit, but after disagreements with his father, he joined the army as a common soldier and changed his name to Dumas after his mother.

There is a lot of amazing information in here about the complexities of race in France before and after the Revolution.  Alex Dumas was not the only mixed-race person in France, and for a while there things were looking really good for black rights and the abolition of slavery.  The Black Count is worth reading just for that.

It was quite lucky for Dumas that he did enlist as a common soldier, because the Revolution came along and nobles were no longer popular, but Dumas' incredible physical prowess earned him fame and promotion.  He married a French girl -- theirs was a very loving and happy relationship -- but he was mostly gone soldiering.  Dumas was a thoroughly committed Republican, and he also spent a lot of his time and energy protecting ordinary people.  (Really, this guy was improbably wonderful.  His son didn't need to rose-tint his glasses very much at all.)  Put in the worst military situations, even in the Alps, he pulled off some remarkable maneuvers.

Unfortunately, there was another rising officer in the French military, and he didn't like Dumas at all.  Napoleon didn't care much about this Republican nonsense and was annoyed by Dumas' resistance to his cult of personality.  He didn't exactly torpedo Dumas' career, but he seems to have made sure that Dumas was neglected.  Then Napoleon wanted to invade Egypt, so he sent a huge force out, and that was mostly a disaster.  Alex Dumas was captured on his way home and imprisoned for two years; he did get home, but his health was broken and he was given no pension.  Napoleon made sure that Dumas was forgotten.

This biography combines the story of a truly amazing man with plenty of good information about the French Revolution, so I learned a lot about that too (like I said, I've never been all that into French history).  It was a great read, and if you haven't read it, put it on your list; you won't be sorry.