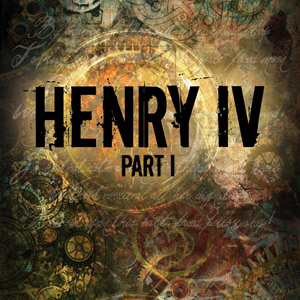 
My Spin title!  It wasn't exactly a 'scary' one, but I wasn't too excited either; I'm more looking forward to Part 2.  But here we go...this play is second in a line of four, after Richard II and before Part 2 and Henry V.

Henry IV is king of England, but the story is really more about his son, Prince Hal -- the future Henry V.  It's set in 1402-03, and we have a couple of major plot lines that converge.  The king won't do as the powerful Percys wish, and he threatens young Hotspur (Henry Percy, and about the 4th Henry in the play), who decides to foment a rebellion.  Meanwhile, Prince Hal is spending all his time hanging around inns, drinking with commoners, and generally causing consternation at court.  He's always with Sir John Falstaff, a corrupt old knight who prefers carousing to all else, and everybody is wondering if the Prince is going to be able to do his job.  The Prince's plan is to quit this life soon, and to accomplish some noble exploits that will impress everyone and show that he'll be a fine king, but first he's going to give Falstaff a good scare.

Hotspur's rebellion grows and gives Prince Hal his chance.  He reconciles with his father and promises to kill Hotspur, and is given a command.   In the battle at Shrewsbury, Falstaff gets up to a lot of corruption and Prince Hal shows his stuff.  Hotspur is indeed killed (with Falstaff trying to take credit), and the rebels fall apart, so King Henry and the prince are victorious...but they have more forces to deal with in the next play.

I'd probably enjoy this play a lot more if I were in the mood for Falstaff, which I wasn't.   I think I'll read Part 2 pretty soon, though. That final scene with Hal and Falstaff is unforgettable!