Wigs on the Green 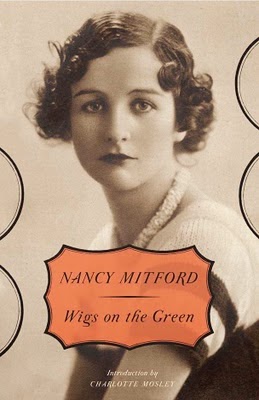 Wigs on the Green, by Nancy Mitford

This was such an oddball funny novel!  I really enjoyed it a lot.  But first, some history: Nancy Mitford, oldest of the six Mitford sisters, was a comedic novelist who made it a rule never to take anything too seriously.   You may also know that two of her sisters were dedicated Fascists (and one was a Communist too! and one became a duchess!  and one just liked chickens.).  Diana dumped her mundane husband to become the lover and later wife of Oswald Mosley, leader of the British Fascist movement.  Unity went to Germany to meet Hitler, who she thought was marvelous. And Nancy wrote a novel that poked some light-hearted fun at them.  This was in 1935, when many Britons still found Fascism more amusing than anything else.  Unity--who the main character is based upon--seems to have taken it in good part, but Diana was so offended she broke off relations for several years.  After the war, Nancy refused to reprint the novel, not wanting to re-offend Diana; by then, Unity was a tragic case of brain-damage from a suicide attempt, and Fascism was just not funny to anyone.

And now, the story: a young man receives a small unexpected inheritance, and he and a rakish friend head off to a village in hopes of hooking young heiresses to marry.  They are thinking that young Eugenia Malmain will be ideal; she's 17, beautiful, sheltered, and filthy rich.  Eugenia, however, is a dedicated supporter of General Jack and his Union Jackshirts, a nationalist Fascist group.  (Jackshirts!  They wear shirts made of British flags!)  She recruits everyone she sees (they all join up to please Miss Eugenia).  Meanwhile, Lady Marjorie and her friend have run off from a wedding and are in disguise.  The local artistic beauty is looking for some amusement, and her artistic Pacifist friends are up for a fight with the Jackshirts.  Let the fun begin!

It's very much like a Wodehouse novel, with the same frothy humor, and the Jackshirts are as absurd as Roderick Spode's Blackshorts.  A very fun story and a pretty good history lesson too.  If you've never heard of the Mitford sisters, look them up right away.