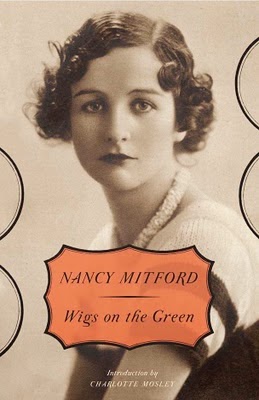 Here's an update on my weekend's reading:  I finished Go Tell It On the Mountain, which is an amazing novel.  Wow.  I'm now about 3/4 of the way through In the Steps of the Master.  And I've started Wigs on the Green, a comedic novel by Nancy Mitford that is very funny!  Sort of Wodehousy.  It was written in about 1935 and pokes fun at Fascist beliefs, which annoyed at least one of her two Fascist sisters so much that after the war, Mitford wouldn't let it be reprinted so as not to offend her--and also because by 1951 Fascism wasn't very funny anymore.  But I'm completely entertained by a group that makes their shirts out of Union Jack flags so that they are called the Union Jackshirts.  There is also, of course, a lot of comedy around romantic pairs.


Clearly I need a 30's jazzy kind of song here, for Wigs on the Green.  I picked "Okay, Toots!" which was a hit in Britain about that time--you can imagine Bertie Wooster banging it out on the piano and it's really catchy--but the only version I could find with the words in is in this collection of songs.  Enjoy them all!