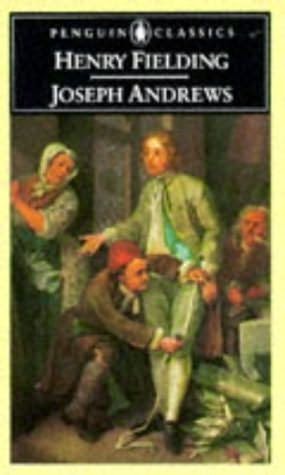 Remember last summer, when I tortured myself by reading both volumes of Pamela?  Well this summer I had a better idea; I read Henry Fielding's second take-off on Pamela.  The first was Shamela, an outright parody.  Joseph Andrews is not quite a parody and not quite a satire, though it has those elements.  This is the story of Pamela's brother, Joseph.  He is just as good-looking, just as intelligent, just as humble, and just as virtuous as Pamela was in her story!

After all, why can't a man be chaste and virtuous?,  Fielding asks.  Joseph is a footman in the house of Lady Booby, a very recent widow.  (She is Pamela's Mr. B's aunt, so now we know Mr. B's real name!)  Lady Booby cannot resist the charms of Joseph, and when he declines to respond, he is fired.  Poor Joseph sets out to walk the long miles to the Booby country estate, and as he meets his clergyman, Mr. Adams, and later on his true love, Fanny (an orphan servant girl at the Booby estate), it becomes a journey of innocents abroad.  The travellers' honesty and goodness stands in contrast to the crooks, rascals, and thugs they meet along their way.

Joseph is a reasonably sensible young man, but Mr. Adams is so absent-minded and credulous that he is a danger to himself and others.  He supplies much of the comedy.  Fanny, meanwhile, is so pretty and charming that half the men she meets promptly try to have their way with her.  She supplies much of the danger.  When they finally manage to get home and plan to marry, everyone but Mr. Adams tries to oppose the match, even Pamela, who is revealed as really kind of a snob.   Will Joseph and Fanny ever get their just deserts?

This comedy is much more fun to read than Pamela was.  As I said, it's not really a parody.  Joseph Andrews stands as a novel of its own that plays around with stock literary tropes and gender behavior.  It's quite fun.  Fielding really gets his skewer into society.