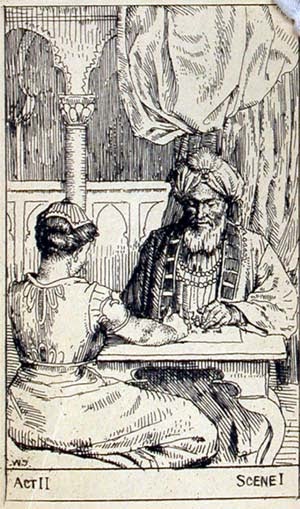 Before I finished work for the summer, I grabbed several books of literature that I thought I might like to read.  One is a collection of "Classical German Drama" that includes selections from Goethe, Schiller, and others I've not heard of.  The play I was after is "Nathan the Wise," by Lessing, published in 1779, and it's about religious tolerance.

Nathan is a Jewish merchant, living in Jerusalem during the Third Crusade.  The play narrates how he, the Sultan Saladin, and a Templar knight overcome their differences to become friends.  At the center of the play is a story narrated by Nathan about three rings which illustrates that each religion (Islam, Christianity, and Judaism) has the ability to teach us to live rightly and love God.  This being a drama, there is also an incredibly complicated plot about Nathan's daughter Recha, the Templar's love for her, and just who their parents are (not who they think, of course!).

Here are a couple examples of the dialogue, which you will see is pretty unusual for an 18th-century play:

Templar:  You know how Templars are supposed to think.

Nathan: Why Templars only?  Why supposed to think?  And only in obedience to their Order's rules?  I know how good men think.  I also know that good men walk upon the soil of every country.

.....
Nathan: Come, we must be friends!  Despise my people if you wish; we did not choose our race when we were born.  Are we our race?  What is a race?  Are people Jews and Christians more than they are human?  Oh, if I had found in you another being who prefers and is content to be a human being!


I really enjoyed reading the play.  Honestly, I read nearly all of it in one day, I liked it so much.  I would be very interested to see it performed, but I'm sure hardly anyone stages it these days.  There was a silent movie made in 1922; that would be fun to see!