In the Steps of the Master 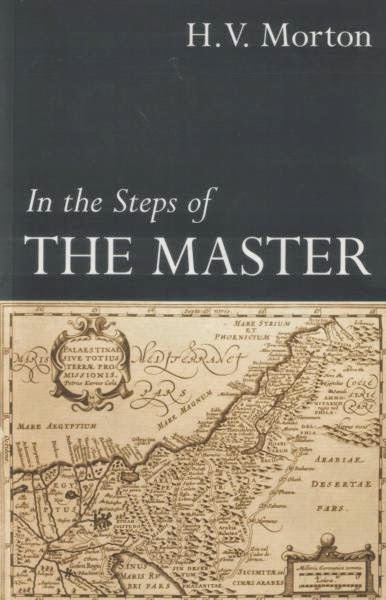 In the Steps of the Master, by H. V. Morton

H. V. Morton was quite a famous journalist in his day.  He made his career by being the first to report on the discovery of Tutankhamen's tomb, and then he wrote a lot of very popular books about spots in Britain (I have read and loved a couple of them).  This book is the account of a trip he took to Palestine in about 1934, and though he writes quite a bit about Crusaders and Arabs and Romans, his main focus is on the events of the New Testament and on the Hebrew people.

The amazing thing about this book is that Morton was there 80 years ago--before the modern state of Israel was established, and just about before much modernization had occurred at all.  I'm quite sure that if I went to the same spots, they would all be very very different now.  Although much had changed in 2000 years, Morton was able to see quite a few things--ways of life, habits, and so on--that had changed relatively little.  Every so often he could look across the street and see one of the parables, or some street scene, enacted in real life.  That would all be long-gone now.

It's a very long book, and Morton has plenty of time to see a lot and tell us about it in detail.  He starts in Jerusalem, observing the old, old churches there, the encrustation of tradition and diplomacy, the rituals and the devotion of pilgrims.  Some of the people he speaks with belong to ancient traditions that I suppose are now swept away.  As he travels around the country, he describes not only what he sees, but what used to be there, the history and the wars and everything.  Morton can very often throw light on a confusing scene from the New Testament simply by being on the spot and observing.  And then there is Roman, Arab, and Crusader history, empire after empire arriving and fading away, and meanwhile, ordinary people scratching out a living.

Several times he is visiting spots that very few Westerners have ever been to, great inaccessible ruins with people living in them that no one else has paid attention to for centuries.  He goes to Petra, for example--now a major tourist destination, but at that time a very difficult trip.  The Krak des Chevaliers is a messy ruin that no one in their right mind would visit when he describes it in the book; now it is all cleaned up and curated.  He visits a priest who has just recently discovered a beautiful Roman mosaic from a long-gone church--it's still buried for safekeeping.  Nowadays it has a new building, a display, and its own website.  (I'm glad it's possible for me to see it!)

Finally, ss you might expect, Morton shows some attitudes that we do not approve of, though as a world traveler he certainly has less of them than most people probably did.

A fantastic book, just fascinating and hard to put down.  I would highly recommend it.