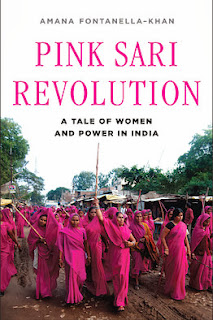 The Pink Sari Revolution: A Tale of Women and Power in India, by Amana Fontanella-Khan

Uttar Pradesh, in the north of India, has long been known as lawless and corrupt.  The thug-run goverment--called the Goonda Raj--operates protection rackets, victimizes ordinary citizens, and has the police in its pockets (which is usual; Indian police are paid almost nothing, and so the only people who enter law enforcement do so with the expectation of making a living from bribery, which as you can imagine efficiently undermines what police are supposed to do). In addition, endemic poverty and lack of education keep everyone down, most especially women.

Sampat Pal is a perfectly ordinary woman in Uttar Pradesh, except that she seems to have been born with an enormous amount of chutzpah.  She has been standing up for herself and others her whole life, and now she has a group of women called the Gulabi Gang--they wear bright pink saris and use group tactics to fight injustice and domestic violence.  If a woman's husband is beating her, he might get a visit from the Gang.  If an innocent person has been arrested because he ran afoul of some goonda, the Gang will show up outside the police station and, with a mixture of publicity and public shaming, get him released.

Amana Fontanella-Khan tells the story of the Gulabi Gang by weaving together Sampat Pal's personal story, the Gang's smaller exploits, and Sampat's investigation of a mystery that becomes an important political event.  A young woman named Sheelu has been arrested, allegedly for stealing thousands of dollars and a rifle from a local goonda's house.  But how could a girl do such a thing without being noticed?  What was she doing there in the first place?  Sheelu's story gets more complicated all the time, and although nothing about it is in any way unusual for Uttar Pradesh, the publicity that Sampat and others bring to it wind up turning it into a media circus that brings down a legislator (well, sort of).

It's a really interesting book.  Fontanella-Khan tries to portray Sampat Pal without writing a hagiography of her, and sheds light on several facets of Indian society.  A pretty good read.
politics