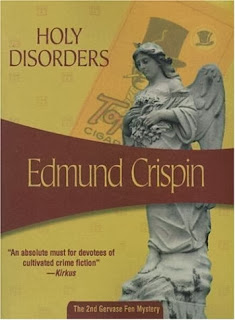 This is the second Gervase Fen mystery, and it is really pretty good.  It is very funny, and also, at the same time, a solid mystery with some icky things going on.

Geoffrey Vintner, an organist and composer, is summoned (by Fen) to the tiny country village of Tolnbridge to substitute for the organist, who has been attacked.   He is warned to be careful, but who would try to assassinate a substitute church organist?  Several people, as it turns out, and Geoffrey is forced to realize that there must be a well-organized group of criminals after him.

At Tolnbridge, more than one person connected with the church has been murdered.  Black magic is in evidence, but so is espionage.  Geoffrey and Gervase Fen have a bewildering mystery to untangle--inbetween Fen's insect-collecting excursions.

A lot of the good stuff here is in the funny style.  For example, Geoffrey is attacked in a sporting goods shop and a melee ensues, featuring footballs and rollerskates:


This pink young man, recovering his balance, smote the Enemy with a cricket-stump.  The Enemy subsided, and the pink young man banged inexpertly at his head with a hockey-stick until he became silent.  Geoffrey at last succeeded in getting out his revolver, to the accompaniment of an ominous tearing of cloth, and waved it wildly about him.

Give it a try!