The Fall of Arthur 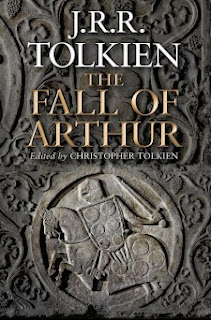 (Question for you at the end, so be sure to read it!)

J. R. R. Tolkien seems to have had a penchant for unfinished projects, and this is one of them, newly edited and annotated by the untiring pen of Christopher Tolkien.  Looking at the number of amazing unfinished stories and poems he wrote, I think we should all be grateful to C. S. Lewis for pressuring him to finish the Lord of the Rings.

This  is an incredible thing--Tolkien was writing the story of King Arthur's doom, the final tale of Mordred's treachery and the battle at Camlann--and he was doing it in the Anglo-Saxon alliterative verse form that Beowulf was written in,, only of course in (somewhat) modern English.  I'm sure he could have written it IN Old English, but luckily he didn't go quite that far.  The whole thing  really does read (to my untrained eye) about as much like the real thing as modern English can be.  It's got all the atmosphere and flavor.  It's pretty stunning really.

There are five cantos.  In I,  Arthur and Gawain to go war in Europe, and then start home when they hear of Mordred's treachery.  The second canto has Mordred preparing for war and pressuring Guinever to marry him, but she escapes.   Canto III is rather long and tells Lancelot's story.  IV and V show Arthur's return and preparations for war.   Tolkien's choices of the details of the Arthur legend to use are very interesting--his portrayal of Guinever's character, for example, and other elements of the story.

Christopher Tolkien adds some essays to the poem: one about the story of Arthur and how various writers treated it, another about the many notes on the poem Tolkien left behind and how it connects to other poetry he wrote. I will confess to skimming these--the Arthurian information was familiar and I'm not enough of a Tolkien devotee to want to know every detail--but they are there for those who do want them.

If  you are a Tolkien fan, or have an interest in Arthurian legend, I think this is a must-read.  It's very short--disappointingly so--so it's not difficult, though close attention  is necessary.


Reading the poem made me want to re-read some of the other Arthurian material I have around the house, which is actually something I keep thinking about and yet not getting to.  In college, I audited a  medieval literature course that mostly focused on these stories  (it was taught by my favorite professor!), and I really enjoyed it.   Anyway, I was sort of thinking that maybe if I did a reading challenge, it would serve as motivation for me and maybe be fun for other people too.  So, I'm taking a poll: is anyone interested in an Arthurian literature reading challenge?  I would make it pretty small and laidback, but I would want the main focus to be on the old stories, Malory or Chretien de Troyes and so on.  I would allow for modern retellings, too, but they would be limited.  Please tell me what you think!
Narrative poetry challenge