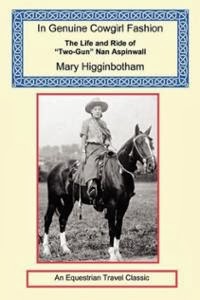 In Genuine Cowgirl Fashion: The Life and Ride of "Two-Gun" Nan Aspinwall, by Mary Higginbotham

This must be one of my more obscure titles, and probably needs an explanation.  "Two-Gun Nan" was a cowgirl in Western-style shows from about 1905-1929--like Annie Oakley, but later on.  She would do fancy riding and lariat tricks, and of course lots of trick shooting.  My grandmother used to have a framed show poster hanging in her house, because Nan was a cousin of some kind to her stepfather.  Nan Aspinwall is practically unknown now, but she was quite a celebrity in her day, especially because of a publicity stunt--

In 1910, Nan rode by herself on horseback from San Francisco to New York City.  She was the first woman to make the trip on her own.  I have a copy of a newspaper story about it from a San Francisco paper somewhere around here, and I've been kind of interested in her for a long time. 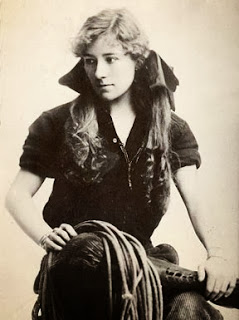 I was quite surprised, though, when I came across this book on Amazon.  Nan does not appear in most histories of the West; she disappeared from public view and was forgotten, but somebody tracked her down and wrote up a biography for an MA thesis.  Thanks, Mary Higginbotham, wherever you are!

This very short biography (there isn't all that much information!) reads like the academic thesis that it is.  There are chapters about women in the West and how 'cowgirls' changed popular ideas about what women could do.  I was mostly interested in the biographical details, though.  Nan started off playing two roles in shows: "The Montana Girl," doing trick riding, and "Princess Omene," a family-friendly Oriental dancer.  There is a nice description of Nan's long ride, and a good deal about her career after that; she and her husband, Frank Gable, eventually owned their own traveling Western show.  And what happened to her after Frank's death?  She retired from show business and lived a long and quiet life, occasionally surfacing to talk about her experiences.

There was one problem, though; about a third of the footnotes got left out.  I went to go look up a source and it wasn't there!

This biography is published as part of an equestrian travel series--if you want to read about long trips on horseback, these are your people!  There is a long list of titles in the back and several of them sound really interesting.