I missed this event last year, but I think I need to join up for January 2014!  Ana at Things Mean a Lot explains: 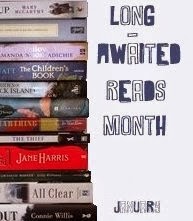 Some of you might remember that last January, Iris and I hosted a blogging event called Long-Awaited Reads Month. We originally came up with it as a plan to cope with the January blues, but because these things are more fun when shared, we decided to open it to the whole of the Internet. Long-Awaited Reads Month 2013 was a huge success — I spent it devouring Megan Whalen Turner’s Queen’s Thief series and finishing Jo Walton’s Small Change trilogy, and the result was the most satisfying reading month I’ve had all year — so we’re bringing it back in 2014.
As we explained last year, the rules are very simple and the event is meant to be completely relaxed. Here’s what you have to do:

Yes, quite simple!  Posting a reading list is completely optional, but here are some books in my pile that I would like to get to:

Maidenhair, by Mikhail Shishkin -- A fairly recent Russian novel that has been making something of a splash.  Supposed to be on the complex side.

The Thing Around Your Neck, by Chimamanda Ngozi Adichie -- I read Half of a Yellow Sun a while back and thought it was great, and picked up this book of short stories sometime fairly recently (almost certainly during the drive to keep our used bookstore open).

Dead Souls, by Nikolai Gogol -- It's been on the pile long enough that I'm starting to dread it just because I haven't read it yet.

In the Steps of the Master, by H. V. Morton -- I love his books, and this one is all about Palestine, which he explored in 1934.  Come to think of it, I ought to read it now as a follow-up to Bible and Sword...

The History of the Renaissance World, by Susan Wise Bauer -- I got it right away when it was published but haven't read it yet, which makes me sad.