The Crying of Lot 49 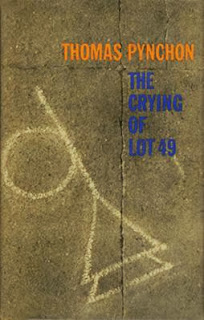 The Crying of Lot 49, by Thomas Pynchon

I never would have thought of myself as someone who liked any modern literature at all, if not for the Modern American Novel class I took (under duress, because the class I wanted was full and I needed one of them to graduate) in my senior year in college.  And somewhat to my surprise, I really liked some of the books we read.  The Crying of Lot 49 was hands-down my favorite.  Recently on a Classics Club discussion, someone commented that they had read it and not liked it one bit, which made me want to read it again to see how I liked it this time.

Oedipa Maas is surprised to find that she has been named executor of the will of a former boyfriend.  Pierce Inveriarty was a real-estate gazillionaire, and he's left her in charge.  As Oedipa tries to make sense of Inveriarty's estate, she starts to notice hints and clues of a strange underground conspiracy, a shadow postal service that descends from a secret rival of the Thurn und Taxis postal monopoly of the Holy Roman Empire.  Its symbol, a muted post horn, starts showing up everywhere; stamps that are almost-but-not-quite perfect copies of regular US postal stamps turn up.  As Oedipa follows the clues Inveriarty may or may not have left for her, people disappear--yet, she wonders if she's just paranoid or making the whole thing up.  Or maybe Pierce made it up to torment her?

I still think this is a great short novel.  It's weird, it has strange layers, and it's funny.  Nearly everyone and everything have odd punning names that (sometimes) carry meaning.  Plus I like postage stamps a lot, and I love the idea of an underground secret postal system.  Even the mention of Thurn und Taxis makes me happy.  Lots of other people like it too, and you'll find names and symbols pop up every so often--Yoyodyne Industries, for example, has featured as a mega-corporation in media (in Buckaroo Banzai, for one), and the muted post horn shows up as graffiti.

I like this book so much that it makes me want to try other Pynchon titles, but I am hesitant: the other books all seem to be very long indeed, and Pynchon himself has apparently expressed some disdain for Lot 49, which makes me think his other books might be quite different and maybe not as much to my taste.  Is anyone out there a big Pynchon fan who can advise me on what to try and why I should?
modern fiction