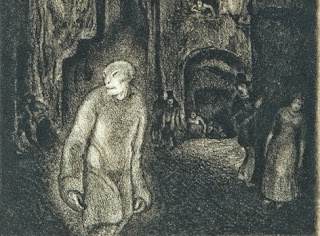 The Golem, by Gustav Meyrink

I'm not sure what to call this novel, besides really strange and bizarre.  I mean, this is easily one of the weirdest books I've ever read.  "Hallucinatory" is the best descriptor I can come up with.  And it's often described as Meyrink's easiest work to read....

Gustav Meyrink (born Meyer) was the illegitimate son of a wealthy German baron and an actress.  He did quite a bit of writing, was enormously interested in unusual religions and the occult, worked as a banker, and went to jail for fraud (it's not clear that he was guilty).  Der Golem, Meyrink's first novel, was published serially in 1913-14 in a German magazine, and made him famous.  After that he translated Dickens into German and wrote much more.

An unnamed narrator dreams that he is Athanasius Pernath, a jeweler living in the Prague ghetto.  As he meets his neighbors, he hears about the legend of the Golem, a clay man brought to life by kabbalistic magic. Every 33 years, people see the Golem walking through the ghetto.  Strange and mystical events follow Pernath, and he has dreams and visions--he may be the Golem.  He realizes that he has no memory of his youth, and finds out that something terrible happened to him, so that doctors hypnotized him into forgetting.  Pernath becomes obsessed with a wealthy and beautiful young woman, Angelina, who is married but carrying on an affair with a local doctor.  He is then imprisoned on a false charge, and when he is released, the ghetto is being razed and he cannot find anyone, especially not the neighbor girl he truly loves.  The narrator awakes to find that Pernath may be a real person, and goes to hunt for him.

It's disjointed, obscure, and strange.  Layers upon layers of visions and dreams make it very difficult to figure out what's happening, and reality is impossible to find.  But it's very interesting. October is probably the right time to read this story, though it is not in any way your usual scary story.  It reminds me much more of the mystical works of people like Charles Williams or George MacDonald.  There are as many frames as a tale by Isak Dinesen.