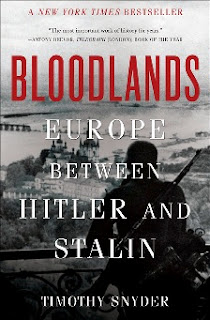 Bloodlands: Europe Between Hitler and Stalin, by Timothy Snyder

I've been working on this one for a while. It is just about the most unremittingly grim and tragic book I've ever read.  That doesn't mean you shouldn't read it, because YOU SHOULD.  But it won't be fun.

Timothy Snyder illuminates a whole lot of history that we in the West haven't really been very aware of until recently.  Since the fall of the Communist bloc, a lot has come to light about World War II in Eastern Europe that we didn't easily see before.  By "bloodlands," Snyder means the part of Eastern Europe that suffered most in the first half of the 20th century--first from Stalin, then from Hitler, and then from Stalin again.  This area, which is now mostly contained in the countries of Ukraine, Belarus, Poland, and the Baltics, suffered three invasions, all of which involved deliberate mass murder.  In total, the Nazi and Soviet regimes put about 14 million people to death.

Snyder carefully documents all of it, from about 1920 to the early 1950s, and makes a lot of distinctions and comparisons between the two.  First he covers the Soviet famines in Ukraine--famines that were deliberately induced.  Then the Soviet takeover in Poland and the Baltics, which liquidated the educated classes.  He chronicles the alliance between Hitler and Stalin, and then Hitler's invasion of the USSR.

Most of the second half of the book is devoted to the Holocaust and German operations in Eastern Europe.  Snyder really wants readers to understand that while we in the West have focused a lot on particular concentration camps as the ultimate in Nazi evil, there was much more that American troops never saw.  Death camps, which did nothing but murder Jews, left almost no survivors to tell their stories and were all contained in areas that ended up behind the Iron Curtain.

After the war, Stalin controlled even more of Eastern Europe than before and committed more atrocities, decreeing that each country should be ethnically homogenous.  The Soviets also had particular historical narratives that they wanted to push, so the Holocaust was subsumed into a narrative that pitted victorious Communists against reactionaries.

This is an important book of history for Westerners to read, because it contains a lot of information that simply wasn't very clear before.  We tell ourselves only part of the story.  This part of the story is grim and hard to grasp, but we should try.