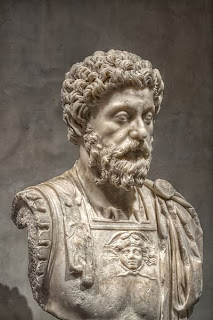 Marcus Aurelius was the emperor of the Romans from 161-189 AD.  He doesn't seem to have been all that cut out to be emperor, because he was mostly a very nice guy, and so I was surprised to find that he had a pretty successful reign and didn't get poisoned or anything..  These meditations are really his personal writings to himself; they were not meant for publication.  They were private.

The twelve books of reflections, written on campaign, contain a lot of advice on how to live a good life.  Marcus Aurelius was a Stoic, but a slightly unusual one.  He is humble and talks about God, or the gods, quite a bit.  All of the advice is about doing what is right regardless of others' opinions, doing good to others, putting duty over personal desire, and so on.  Here are a few snippets:

Keep yourself then simple, good, pure, serious, free from affectation, a friend of justice, a worshipper of the gods, kind, affectionate, strenuous in all proper acts.  Strive to continue to be such as philosophy wished to make you.  Revere the gods, and help men.  Life is short.  There is only one fruit of this earthly life, a pious disposition and social acts.

This is the chief thing: Do not be perturbed, for all things are according to the nature of the universal, and in a little time you will be nobody and nowhere, like Hadrian and Augustus.

Suppose any man shall despise me.  Let him look to that himself.  But I will look to this, that I be not discovered doing or saying anything deserving of contempt.  Shall any man hate me?  That will be his affair.  But I will be mild and benevolent toward every man...."


It sounds like a combination of Zen Buddhism and Christianity, and is attractive enough to have become a classic, despite the existence of plenty of other books about Stoicism.  It's actually pretty hard to tell that the guy writing these thoughts down was the single most powerful man in the world, who ruled over huge swathes of Europe.
classics Euro Challenge religion TBR challenge