In Search of Ancient Ireland 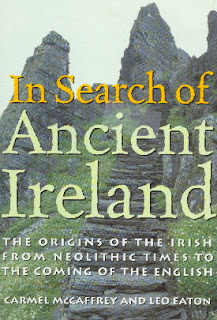 In Search of Ancient Ireland, by Carmel McCaffrey and Leo Eaton

A couple of years ago I read a book by Carmel McCaffrey called In Search of Ireland's Heroes.  It covers Irish history after the Norman invasion of 1167, and I saw that there was a previous book about Irish history before that.  It turned out to be kind of hard to find, to my surprise, but what I hadn't realized was that the book was written as a companion to a PBS program.   (Not the one about the Celts that had lots of Enya music--a different one. Same title as the book.)

McCaffrey and Eaton start with archaeological evidence about Neolithic societies, which is very interesting.  They have some good information about the development of early Irish culture, how their origin myths developed, and how very different those myths are from what we can tell about history.

The section on the conversion to Christianity is very interesting; unlike many countries, Ireland did not experience a conversion by the sword.  The authors cover what we really know about St. Patrick and the other major Irish missionaries and saints.  There are some very nice bits on Irish literacy and art.

After that it gets more into politics and rivalries between various ...clans?  tribes?  What word do I want?  McCaffrey uses tribes.  This is not quite so exciting, as there is a lot of politicking and not so much adventure.  This goes on until the Norman invasion, and the story continues for a bit after that.

One problem is that this book is supposed to be about Ireland's history before "the coming of the English" (in 1167), but right in the beginning of the book, McCaffrey states that Irish culture was oral until the English arrived, bringing writing with them.  What she really means there is that Irish culture was oral until the arrival of Christianity, which is quite different and happened hundreds of years earlier than the Norman invasion.  So that is quite confusing, and I wish she had been more exact about "the English."  First she talks about 'ancient' Ireland being the time before people were writing things down, and then she spends most of the book talking about a literate, medieval society.   I was also a bit disappointed by her references to the Dark Ages in Europe; her meaning was that Irish literacy and education was thriving in the early medieval era when most of Europe was dealing with the fall of the Roman Empire and lots of pushing from the East, but I really do not like the term "Dark Ages" applied to it.

On the whole, I enjoyed the book, but I think there are probably better histories of Ireland.  I would have liked more information about ancient Ireland, as in Neolithic society; in fact I would have preferred two separate (but consecutive) books, one about ancient history and one about the transition to Christianity, going up to the Normans.
Euro Challenge history Wishlist