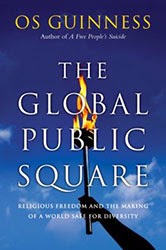 The Global Public Square: Religious Freedom and the Making of a World Safe for Diversity, by Os Guinness

I've heard of Os Guinness before as a co-author of a reference book on literature for young students.  I had not realized that his main thing in life is writing books of social criticism and advocating in social policy.  Although he currently lives in the US, he spent much of his life working in Europe.  He seems to be British or  Irish by birth, having been born in China and gotten his PhD from Oxford, but that's a guess based on two minutes of poking around the Web.  Certainly his biographical sketch is worth reading; he's had an exciting life!

Guinness' major concern--here and in other books--is the preservation of the basic human rights of freedom of conscience and speech as an essential element of a free society.  Everyone, regardless of their faith or lack thereof, ought to be able to exercise their beliefs.  He calls this soul freedom, after Roger Williams' ideal of soul liberty.

Here, Guinness makes his case for the need for a civil public square: one in which all viewpoints are accepted and respected.  This, as opposed to a "sacred" public square, in which one official religion holds power or a "naked" public square in which no religious point of view is respected.  In order to live together with all our differences, none must have more power than others and a civil discourse is necessary:


True human flourishing requires a form of harmony that blends diversity with genuine liberty.  Diversity without liberty is routine for authoritarian regimes, but humans are not slaves to governments or ideologies...the challenge of our time is to blend diversity with liberty and still create harmony.

While it is fairly easy to see that Guinness is coming from a somewhat conservative and religious standpoint, he makes great efforts to acknowledge weaknesses and strengths on all sides, which I appreciated.

I think Guinness is correct in his insistence on the primacy of these particular rights of conscience and expression.  Absolutely.  While I didn't always agree with his logic about certain details or events, and I'm not coming from the same religious tradition as he does (actually I don't know what his may be but it is obviously not mine), I agree with his thesis.

The execution may have left something to be desired, though.  I wish the book had either been more compact, or more fleshed out with examples from history.  It's a highly theoretical book and sometimes got a bit repetitive.


I received a copy of this book from the publisher in exchange for an honest review.
politics religion