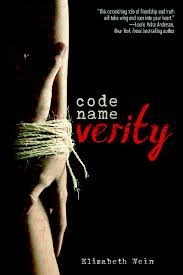 It's hard to say much about this book besides wow. It's no wonder that this story made the shortlist for the 2013 Carnegie Medal (Britain's medal for the best children's book, as with America's Newbery, though this is not a child's book).  Lots of people around the blog world are raving about Code Name Verity, and the hype is deserved.

1942:  "Verity" is an Allied spy, set down in France on her first mission--and promptly caught by the Nazis.  She has broken down under torture and is writing an account of her activities in exchange for favors such as clothing or another few days of life.  But what she writes is not so much straight information as the story--from her best friend's perspective--of how she ended up as a spy in France.  Only much later do we even find out her name. And then the novel grabs you and does not let go.

The prisoner and Maddie are great characters, and it's fascinating getting to know them as the story unfolds.  The reader must keep in mind that the first half of the book is, first of all, a document written for a torturer to read, and second, pretending to a point of view that the writer doesn't actually have.  Don't think it's always reliable.  It takes a while to figure the people out.

Wein put a whole lot of effort and research into her story; everything is something that could happen, and that somebody did do.  There some nice notes at the end about her research and writing process.  My favorite part of the historical detail was catching the use of an early ballpoint pen!

I am telling you: read this book!   It is really great.

This is a YA novel; I wouldn't give it to a kid under 12.  It's not horribly graphic--this is not a Hunger Games level of violence--but it is, on the other hand, a realistic story with events that actually happened in the world not too long ago.