The Agency: A Spy in the House 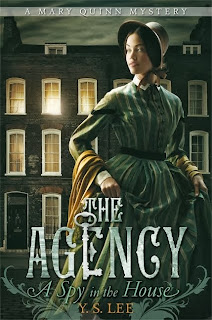 I don't remember what blogger pointed me to the Agency series by Y. S. Lee; it's been on my wishlist for a long time, and I finally got around to ILLing the book.

Mary Lang was a 12-year-old London street urchin when her life took an unexpected turn and she went to live at a school dedicated to preparing girls to earn their livings.  At 17, even more unexpectedly, the headmistresses of the school reveal that some pupils go on to work as undercover agents for the Agency.  After all, who is less noticeable than a servant girl?  No one expects her to be doing detective work.  And so Mary joins up and heads off to her very first assignment, as paid companion to a spoilt teenage girl whose father might be cooking his books.

It took me a little while to get into this story and at first I didn't think I would continue.  It was when Mary started her assignment that I got interested.  After that, I liked the book a lot.  The historical setting is excellent; Lee is a scholar of the Victorian era, and it shows.  (Plus she has a taste for the grimy, which is great.)  The mystery is solid and Mary is a great character--not only is she a street urchin turned respectable woman, she has her own secret that no one in her life knows about.

Part of what I enjoyed in this story was its relative plausibility.  Mary really is working within the constraints of Victorian society, and if no one was smart enough to employ girl servants as spies, they certainly should have thought of it.  It's a historical adventure, but it's not as extravagantly implausible as so many are, and Mary, while a feminist, is not so much of a "21st-century heroine plopped down on a 19th-century stage to rescue everyone with her superior morals" kind of girl.

I would quite like to read more of Mary's adventures, but I'm not sure I want to bother with ILLing them.  I'll give it to my 13yo daughter, though, and see what she says.
Wishlist YA lit