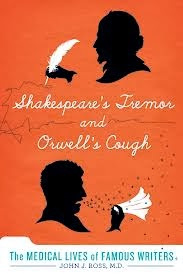 My mom handed me this book, knowing I would enjoy it.  Ross talks about great writers' medical conditions!  Why did Milton go blind?  Is there something behind Shakespeare's constant mentions of 'the pox'?  Let's talk about the Brontës' tuberculosis and Joyce's eye problems!

In each chapter, Ross gives a short biography of a great writer and then goes into detail about what we know about the medical history.  Ross is a good storyteller, not too wordy, and he's very good about not speculating too far.  Often he points out far-fetched theories and punctures them, reminding readers that, for example, plain old TB was more than enough to kill all the Brontës without resorting to fanciful diagnoses.  He is careful not to get too confident or too fancy, which I appreciated.

This would be a good bedside book if you're not easily grossed out; it's easy to read a little bit at a time, but there is a lot of gory detail about the progression of various diseases and the horrifying treatments for them that people used to use.  It will certainly make you feel astonished at the way people used to consider lead,  antimony, mercury, and arsenic to be excellent cure-alls, but Ross also points out the ways that those treatments did actually work sometimes, sort of, thus giving people confidence in them.

I learned a whole lot of really uncomfortable facts about STDs.  I found out that Milton probably went blind from detached retinas, something I expect to have happen to me someday.  (Yay laser surgery!)  Joyce had glaucoma, which I also expect to get, but the treatment then consisted of snipping out bits of the iris to relieve the pressure. (Yay eyedrops!)  And here's an odd coincidence: I read about that glaucoma treatment twice in the same day, in two different books.  Weird, right?


One topic that is not extensively covered here at all is drug use and the resulting medical problems.  Samuel Taylor Coleridge, his opium habit, and his resulting stomach troubles are not here, nor is anyone's awful drinking problem or anything like that.  Ross sticks mostly with bacteria, germs, and traditional treatments, which is fine with me.

I am so grateful for modern medicine!
books history science