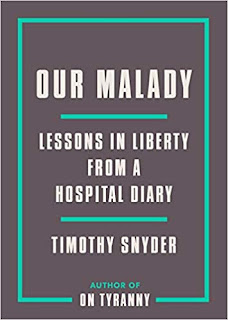 Our Malady: Lessons in Liberty From a Hospital Diary, by Timothy Snyder

This isn't the sort of title I would usually pick up, but I love Timothy Snyder's work, so I was interested in giving this one a go as well.  Previously, I have read Bloodlands, Black Earth, and On Tyranny.  I had better put The Road to Unfreedom on my list!  Obviously from the titles, he has mostly written about history and totalitarianism, specifically as applied in Eastern Europe.

Our Malady is different.  Like On Tyranny, it's very short; the two seem to go together, sort of.  But this was written in 2020, after a health crisis, and it focuses on the American health care system.

At the end of 2019, Snyder suffered a burst appendix that led to a liver infection, and came very close to death -- largely due to doctors' neglect that was encouraged by Snyder's own unwillingness to admit to pain, but which was mostly due to lack of time.  During his very long recovery, the Covid pandemic started.

Snyder argues that our health care system, built for profit and choked with insurance red tape, restricts liberty.   Doctors and nurses are not allowed to take the time they need to focus on their patient and give good care.  Many Americans are reluctant to seek the care they need because of the costs.  A medical emergency can easily result in enormous debt or bankruptcy.  His claim is that a single-payer system of universal health care would not only deliver better care for less cost, it would increase personal liberty and dovetail with the Founders' ideals of "life, liberty, and the pursuit of happiness" and "all men being created equal."

He then moves on to Covid, and gives his opinion about how the US handled the first several months of the pandemic.  He's not impressed.  He's similarly unimpressed with some American cultural ideas of how freedom should work -- the only half-conscious ideal of a rugged individualist, carving out sustenance and a home on his own, with no help from anyone.  Snyder's ideas of liberty involve a supportive community that increases freedom for all its members.

A very interesting short work that will give the reader plenty to think about.