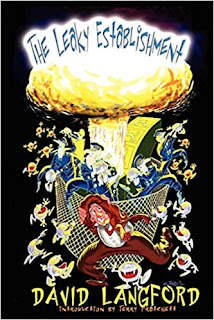 The Leaky Establishment, by David Langford

This is such a great comedic novel, and it is (as far as I know) undeservedly little-known.  It's a quintessential British workplace comedy; probably 'The Office' got a lot of tips from it, though I have never seen either of the Office shows so I wouldn't know.  Anyway, it was published in 1984 and reissued in 2003, with an introduction by Terry Pratchett in which he starts:

I hate Dave Langford for writing this book.  This was the book I meant to write.  God wanted me to write this book.

And indeed in a parallel universe maybe he did, but here, David Langford did it, and a bang-up job he did too.

Roy Tappen, nuclear physicist, works at NUTC, a high-level nuclear research facility -- the UK's equivalent of Los Alamos, where he is supposed to work on fascinating scientific problems and help to preserve the free peoples of the earth from the clutches of evil.  In reality, he mostly fights a losing battle with the bureaucratic forces of triviality, red tape, and zealously misguided security -- his weapons are humor and wit.  So there is quite a lot of (very funny) description of life at the facility.

Tappen's best work buddy, Llewellyn, wanders in and leaves a 'pit' -- a sphere of plutonium, wrapped in an aluminum cover, perfectly safe to carry around unless you crack it open -- behind.  And Tappen unwittingly takes it home, which is when his life starts to fall apart.  He has to smuggle it back in to NUTC, but all his increasingly desperate schemes fail.  His wife won't stay in the house with it.  A local reporter keeps reporting his leg-pulls as serious news, his oddball neighbor and co-worker is up to something, his boss makes him do the worst jobs, Security is eager to catch him out -- and then a scheme backfires so badly that he now has TWO pits to return.  And everyone is preparing for a visit from the Queen, which makes it all much worse...

"The Press Officer proposed again that since public hysteria and apprehension are too easily inflamed by scare-words like 'plutonium,' this element be renamed, e.g. as 'Element 94,' 'Ingredient X' or 'Superfuel'...An alternate proposal was to classify the word 'plutonium' under the Official Secrets Act and to make knowledge or use of the word illegal..."  [meeting minutes]

Item Nine: owing to budget cuts it was agreed that during next week's Royal Visit the Queen would not after all be invited to open the new weapon assembly building by pressing a button to launch a small model Trident missile which would travel fifty yards and devastate a cardboard simulation of the Kremlin.

"This is the control room of the NUTC linear electron accelerator, the third most powerful in Europe..." (And about the hundred and fiftieth in the world, Tappen brooded. Bloated plutocratic Americans.)

The security course was for anyone who annoyed Security, and consisted of staggeringly tedious lectures which after a while, if you annoyed Security as often as was a right-thinking man's duty, you came to know by heart.  A Clean Desk Is A Secure Desk.  Loose Lips Sink Spaceships.  Change Your Combinations Every Week.  Tell Nothing To Your Wife, She Could Be A KGB Agent.  Accept No Lifts From Strange Men In Fur Hats....

Royalty Week.  No far-ranging scheme of foreign sabotage by Kremloids could have paralysed NUTC so effectively as the royal visit it had manoeuvered for and demanded -- as a pasty-faced kid might demand huge revolting confections of sticky chocolate, oozing goo, tooth-welding toffee and bright pink synthetic flavours, guaranteed to produce extreme unwellness on the, as it were, rebound.

"...and before Monday you'll be expected to reset your security cupboard to a combination you don't know."

"I happen to know that the Swiss know all about this.  CERN doesn't levitate because they nailed it down."   [A local, non-royal, VIP]

This is such a funny novel.  Do make sure to read it.