I've always thought of this as a slightly oddball Narnia story, but that doesn't mean I don't like it.  I like this one quite a bit.  I just feel like it doesn't quite fit the mold. 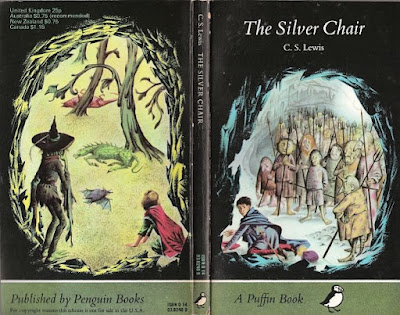 OK, so Eustace is back in school, and his school sounds like a dystopian Summerhill gone wrong, which is funny to me.  Lewis hated his own schooling, but he still seems to have stuck to that model as being the proper kind of education.  This school is co-educational and works on democratic lines, and so it's run by vicious bullies.  (Because boys' public schools didn't have much bullying??)  Eustace runs into Jane Pole and tells her about Narnia, and whoosh, into Narnia they go!  Well, actually, they start off at the top of the mountains that were visible across the edge of the world in Voyage of the Dawn Treader, and Aslan sends them over the sea.

I like Jill very much.  She's a sensible, tough kid.  But she and Eustace are kids, and they act like it. Their bickering, on a pretty constant basis, would drive any parent round the bend.  If Puddleglum had a car, he'd be threatening to pull over and turn around.  They're also prone to blaming each other, getting distracted, and forgetting their goals -- though those are faults we'd find in adults too!

I love Puddleglum.  Marsh-wiggles are a wonderful invention, and I enjoy Puddleglum's character a lot (even though I wouldn't want to live with anybody so incredibly pessimistic!).  I enjoy his drunken "Respectowiggle" speech, and his heroism in stomping out the Witch's fire saves the day.  The final touch is that he's considered to be far too light-minded and fun-loving by the other Marshwiggles, and his ambition is to be more serious.

You could say this story is all about perseverance, or endurance.  Or maybe hope.  Our group has to endure quite a bit of hardship in order to achieve their goal, and they have to learn to stick to their principles even when it's really hard.  Jill loses focus due to the Lady of the Green Kirtle's glamour and mentions of warm beds, and they narrowly escape being eaten.  Their final test is to resist the Witch's insistence that the Overland doesn't even exist, and their moment of triumph comes when Puddleglum declares their allegiance to Overland, the sun, and Aslan even if they don't really exist.

The governing planet of The Silver Chair is, obviously, the moon.  The moon is mutable; change is one of its primary characteristics, and so it governs unstable things, especially water.  Sometimes you'll see the moon described as watery, which doesn't mean that it's wet itself, but that it governs the water, especially  the tides.  Another unstable thing the moon influences is the human mind; thus the words lunacy and lunatic, or moonstruck.  The moon marks the boundary between the earthly atmosphere and the heavenly realms.  Its metal is silver, which is both the color of moonlight and also mutable, turning grey with tarnish just like the moon has grey spots -- that people thought of as seas.

Thus the silver chair is silver, and it's where Rilian (who is significantly compared to Hamlet) changes from his enchanted, mentally unsound state into his true self.  The Lady of the Green Kirtle is herself a shapeshifter, and her voice and laughter are described as silvery.  Much of the story's action is either at night, in the moonlight (as during the Parliament of Owls), or in the dark, underground, and our characters spend most of their time cold and wet during their journey.  Underland is also a watery place, with the huge Sunless Sea, and it's destroyed by floods of water at the end.  And, I seem to recall that Selene's chariot is pulled by a pair of horses that are white and black, just like Coalblack and Snowflake.

It has finally occurred to me to include bits from Lewis' early poem, "The Planets," with this section of my post, and so here's the part about Luna.  You are sure to spot quite a few terms that make it into The Silver Chair:

Lady LUNA, in light canoe,
By friths and shallows of fretted cloudland
Cruises monthly; with chrism of dews
And drench of dream, a drizzling glamour,
Enchants us–the cheat! changing sometime
A mind to madness, melancholy pale,
Bleached with gazing on her blank count’nance
Orb’d and ageless. In earth’s bosom
The shower of her rays, sharp-feathered light
Reaching downward, ripens silver,
Forming and fashioning female brightness,
–Metal maidenlike. Her moist circle
Is nearest earth.

I think if you read the poem with the Narnia books in mind, it becomes pretty obvious.  Just look at the Jupiter section, with its lines "Of wrath ended And woes mended, of winter passed And guilt forgiven..."