The Eternal Husband and Other Stories, by Fyodor Dostoevsky 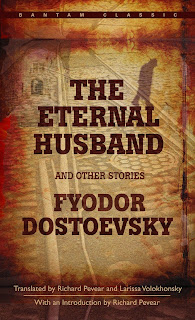 I picked this one from my TBR pile for February because the Classics Club's dare for the month was to read something that had to do with romance/love.  I looked at my pile, and, well, an eternal husband sounds like it has something to do with love!  Or at least marriage, which isn't at all the same thing in a Dostoevsky novel.  In fact these stories were utterly without romance, even the ones that had marriage in them.

In fact, the first story, "A Nasty Anecdote," is all about a wedding!  Ivan Ilyich Pralinsky is a general, and has spent the evening with two friends, boasting about his liberal credentials.  On the way home, he comes upon the wedding celebration for a very lowly clerk in his office, and decides to prove his boasts by entering the event and being generously kind to his employee.  It goes horribly, horribly wrong.  Everyone is embarrassed, Ivan Ilyich, a non-drinker, drinks too much, and every time he tries to repair the damage it gets worse.  Eventually he becomes ill and has to be put to bed in the only available place -- the newlyweds' own bed.    It's the kind of story where you feel nothing but Fremdschämen -- embarrassment on behalf of another person.

"The Eternal Husband" is really a novella.  Alexei Ivanovich Velchaninov runs into an old acquaintance, Pavel Pavlovich Trusotsky, and can't seem to get rid of him.  This is particularly embarrassing, because Velchaninov had an affair with Trusotsky's wife for a while.    Does Trusotsky know?  Is he hinting around about it?  His wife is dead now, and he talks about their little daughter -- and Velchaninov realizes that the child is actually his.  He feels that she's being neglected (she is), and takes Liza to stay with nice friends, but Liza pines for her distant father, gets sick, and dies.  Velchaninov still can't get rid of Trusotsky, who takes him for a visit to his new fiancee, a girl of fifteen who is already secretly engaged to a much nicer boy nearer her own age.*  There's more, but pretty much Trusotsky is what Velchaninov considers to be an "eternal husband," a man destined to be only an appendage to an (unfaithful) wife, and nothing more.

"Bobok" is a strange story narrated by a man who goes to a funeral, and at the cemetery, sits to rest on a long tomb.  He discovers that he can hear the dead talking amongst themselves.  They seem to become aware and able to speak after a day or two in the grave, and they stay there until the 40th day after death.  Are the dead any different than the living?

"The Meek One" is narrated by a pawnbroker who marries a young woman to save her from desperate circumstances.  He loves her, but is unable to express himself, and lives very frugally in order to save up for a real business of his own.  His assumption that she should obey him and be completely dependent on him, even though he never explains anything and is cold towards her, leads to something of a breakdown in their marriage, and just as he figures out how to mend matters....well, I'm not telling.

"The Dream of a Ridiculous Man" is told by a man who planned to kill himself, but fell asleep before doing so.  He dreamed that he did indeed shoot himself, was buried, and then taken from the grave to an unknown land where everyone lives in innocence and peace.  They treat him with love and he thinks they're wonderful, but somehow he plants a seed of corruption, and watches in horror as they come to love lies, malice, violence, and hatred.  They descend into war and can no longer remember their former happy existence, and they call the narrator mad when he begs them to stop.  He then awakens with new purpose in life.

I think I liked the final story best, but none of them were big favorites.  I'm glad I read them though.

*Fun thing I learned from this book: Sixteen was considered the age when a girl was eligible for marriage, and these stories are full of sweet teenage girls who do not want to marry men in their 40s and 50s.