For week 3, I decided to Be The Expert (and do a little Becoming) about the history of fabric, thread,  the development thereof, and its place in societies and history.  I stayed away from fashion -- that's not my area.  But I sure do love reading about fabric!

These are the books I've read so far: 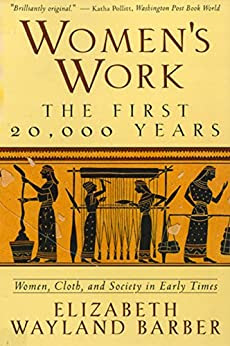 Women's Work: The First 20,000 Years Women, Cloth, and Society in Early Times, by Elizabeth Wayland Barber : My favorite book comes first, and is about the invention of string, which turns into thread, which you can knot and knit and weave in increasingly complex ways.   I love Elizabeth Wayland Barber, and this is a fascinating book with lots of archaeological evidence that focuses on the ancient world, especially Mesopotamia, Egypt, and Greece, though northern Europe gets a look-in as well.   Although I've read it at least twice, I've never written a blog post about it, so this is the Amazon link.  Barber also wrote a lovely book -- The Dancing Goddesses: Folklore, Archaeology, and the Origins of European Dance -- that covers lots of ground about fabric and embroidery, too, which I did review here.

It's also been quite a while since I read The Age of Homespun: Objects and Stories in the Creation of an American Myth, by Laurel Thatcher Ulrich, which was excellent.  I remember especially chapters about spinning linen thread and Native American baskets.  Here's the blurb:   Using objects that Americans have saved through the centuries and stories they have passed along, as well as histories teased from documents, Laurel Thatcher Ulrich chronicles the production of cloth--and of history--in early America. Under the singular and brilliant lens that Ulrich brings to this study, ordinary household goods provide the key to a transformed understanding of cultural encounter, frontier war, Revolutionary politics, international commerce, and early industrialization in America.

Then there's The Golden Thread: How Fabric Changed History, by Kassia St. Clair. (Here's my post.)   While Barber goes in-depth, St. Clair goes broad and hops around the world in chapters, covering a myriad of topics from Viking sails (made of wool!) to silk in China and synthetic spider silk fabric.  This is probably more suited to the non-fabric-obsessed person.

The Subversive Stitch: Embroidery and the Making of the Feminine, by Rozika Parker, (blog post here) is not my favorite here, but is still a necessary read.  Parker's book is about embroidery and women, and it's very 80s feminist but also stuffed with interesting information.  Sometimes I wanted her to go deeper, and sometimes I thought she was overstating the obvious. 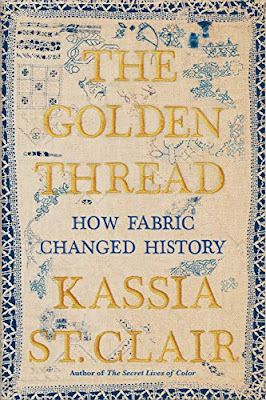 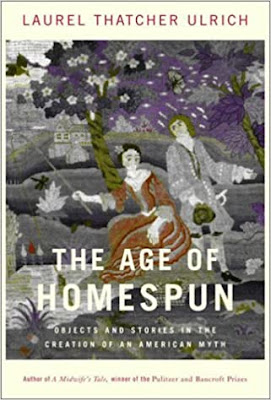 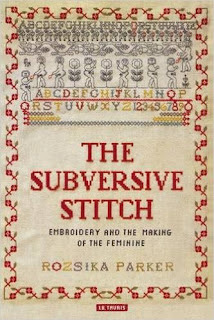 And now, the books I plan to read but haven't got yet, together with their descriptions:

Threads of Life: A History of the World Through the Eye of a Needle, by Clare Hunter:   In 1970s Argentina, mothers marched in headscarves embroidered with the names of their “disappeared” children. In Tudor, England, when Mary, Queen of Scots, was under house arrest, her needlework carried her messages to the outside world. From the political propaganda of the Bayeux Tapestry, World War I soldiers coping with PTSD, and the maps sewn by schoolgirls in the New World, to the AIDS quilt, Hmong story clothes, and pink pussyhats, women and men have used the language of sewing to make their voices heard, even in the most desperate of circumstances.  Threads of Life is a chronicle of identity, protest, memory, power, and politics told through the stories of needlework.

The Fabric of Civilization: How Textiles Made the World, by Virginia Postrel :    The story of humanity is the story of textiles -- as old as civilization itself. Since the first thread was spun, the need for textiles has driven technology, business, politics, and culture.   Postrel synthesizes groundbreaking research from archaeology, economics, and science to reveal a surprising history. From Minoans exporting wool colored with precious purple dye to Egypt, to Romans arrayed in costly Chinese silk, the cloth trade paved the crossroads of the ancient world. Textiles funded the Renaissance and the Mughal Empire; they gave us banks and bookkeeping, Michelangelo's David and the Taj Mahal. The cloth business spread the alphabet and arithmetic, propelled chemical research, and taught people to think in binary code.

Cloth that Changed the World: The Art and Fashion of Indian Chintz, by Sarah Fee   Chintz, a type of multicolored printed or painted cotton cloth, originated in India yet exerted influence far beyond its home shores: it became a driving force of the spice trade in the East Indies, and it attracted European merchants, who by the 17th century were importing millions of pieces. In the 18th century, Indian chintz became so coveted globally that Europeans attempted to imitate its uniquely vibrant dyes and design—a quest that eventually sparked the mechanical and business innovations that ushered in the Industrial Revolution, with its far-reaching societal impacts.  This beautifully illustrated book tells the fascinating and multidisciplinary stories of the widespread desire for Indian chintz over 1,000 years to its latest resurgence in modern fashion and home design. 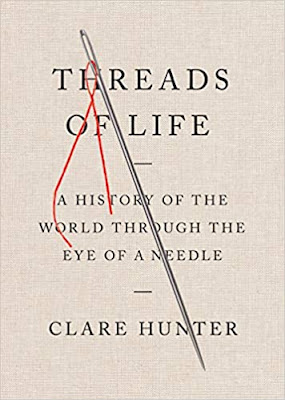 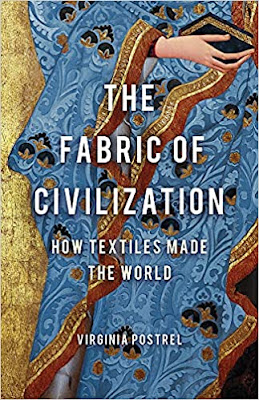 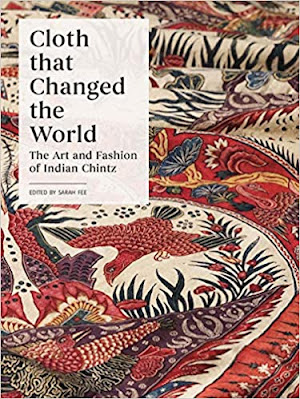