The Sandman, part I

I've been wanting to read the complete Sandman for a while, and RIP seemed a good time to get started.  I believe there are 12 volumes in the collected works, so I'll work on doing 3 at a time.  I was in college in the early 90s, and I was pretty much right in the target demographic and read many issues, though I never bought any or followed it in any coherent way.  I was more of a novels kind of person, and read Gaiman's earlier works as they came out. 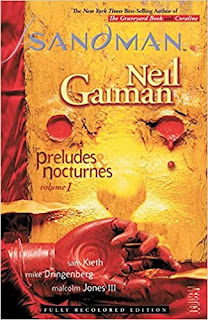 Preludes and Nocturnes, 1989: This first volume is the 'origin story,' sort of.  It turns out that Sandman was a revival and revamping of a long-gone DC character -- I had no idea.  The first version of Sandman ran for a while in the late 30s-early 40s, and featured a crime fighter who subdued baddies with gas.  He wore a gas mask, which Gaiman turned into Morpheus' helm.  A brief second incarnation in the 60s supplied a couple of denizens of his realm and a Justice League connection used in one issue.

Gaiman, however, takes Morpheus back to his mythic origins, and leaves superheroes behind.  He starts his story with the imprisonment of the Lord of Dream for most of the 20th century; a cult tries to call up and imprison Death, but it misfires.  By the time Morpheus gets free, it's 1988, he's weak, and his tools -- the helm, the bag of sand, and the ruby -- have been lost for 50 years.  Most of these stories revolve around him searching for the artifacts and then wondering what he's going to do now.  His sister, Death, shakes some sense into him, and we're ready to embark.

In these first stories, the team is finding its way, and the original artist, Sam Kieth, left after a few issues.  I can see the art settling in and Gaiman developing his ideas.  And my goodness, the 90s are on their way, stylistically.  I don't know about you, but for me, the 'look' of the 90s involved a lot of this kind of thing. 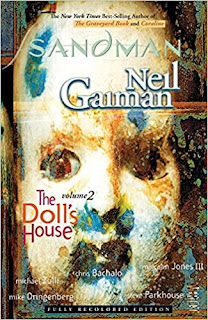 The Doll's House, 1990:  This second series contains an arc and some single-issue stories.   I particularly liked the one where a random peasant announces that death is for suckers.  This prompts
Morpheus to arrange to meet him at the same pub once in every century, giving us a quick tour of some 700 years of London history.  But on the whole, Morpheus is getting his realm back into shape and tracking down a few denizens who have gone missing.  There's a 'dream vortex' to deal with -- a human being who has the power to break down the walls between sleepers, which would wreck the realm.  Her family history is strangely entwined with the dream world, and it gets complex.  G. K. Chesterton makes an appearance (yes, in 1990), and so do the characters from the 1960s Sandman.

The look of the comic has settled down into what I remember as the Sandman aesthetic, and the storytelling is tightly woven, with lots of nice little touches. 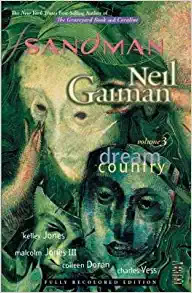 Dream Country, 1990:  This volume is shorter, and features four independent stories in which Morpheus mostly plays only a side role.  In "Calliope," a struggling writer buys inspiration, but (in yet another chapter of 'don't do wrong things because you think you will get what you want')  the eventual cost is higher than he expected.  "A Dream of a Thousand Cats" features a missionary cat with a message.  She wanted to know why the human world was so unjust to cats and how it could be rectified, and now she spreads her knowledge.  The first performance --to a strange audience -- of Shakespeare's greatest comedy is shown in "A Midsummer Night's Dream."  And "Facade" shows the sorrows and difficulties of an unusual woman.  Gaiman also includes the original script for "Calliope" to show how his comics were written.