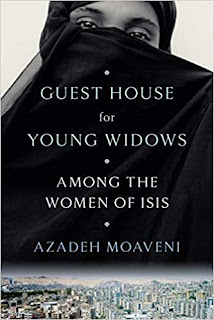 Guest House for Young Widows: Among the Women of ISIS, by Azadeh Moaveni

It's almost ten years ago now that ISIS became known on the world stage, amid such complex circumstances in Syria and the surrounding areas that I can't possibly sum them up here.  They included Syria's civil war, the disappointed Arab spring, and the war in Iraq.  And young, often educated Muslims started leaving their homes to join up with ISIS and the proclaimed caliphate.  Why?  In particular, why the girls?  Azadeh Moaveni, who has spent years embedded in these conflicts, wanted to get to know them and understand their stories.  Her book contains thirteen young women (out of quite a few more) from many different circumstances, and she narrates their stories with understanding.

Early on, the young people who joined up tended to be idealistic.  They heard about atrocities in Syria and wanted to stand against injustice and violence against their fellow Muslims.  They were told that the caliphate would be a haven for believing Muslims in a hostile world; they would find justice, leave prejudice and oppression behind, and care for the vulnerable.  ISIS even promised free health care and to pay off debts.  It wasn't just drifters or people living in unstable circumstances that went.  Women also followed their husbands or brothers, and it was all highly romanticized too.....and when the promises turned out to be a trap -- not at all Islamic, and even more violent than previous regimes, just another group of corrupt people out for power -- leaving wasn't nearly as easy as arriving had been.   Single girls were pressured to marry almost as soon as they arrived, and pretty soon there were babies.

I initially set out to write this book because I was disturbed by media accounts of the Bethnal Green girls' disappearance, and the special culpability that was assigned to them as consorts of evil, despite their very evident youth.  I was struck by how the most noxious things said about these girls were said by other women, in fact women who would otherwise identify as liberal feminists....

To the public, they were either naive jihadi brides or calculating monsters.  But most of the women in this book were neither passive nor predatory, and trying to pin down their degree of agency seemed to be only one line of inquiry, and certainly not the most revealing.  Some collaborated or acted knowingly; some were so young that, despite the outward appearance of deliberate choice, they were not mature enough to exercise anything approaching adult judgement....

...it is more politically expedient to suggest that women have been bewitched than to acknowledge the overarching wars, conflicts, and authoritarian repression that have created the grievances and space for extremism to thrive.

There is a shortage of accounts that consider how ordinary women in the Middle East are drawn to militancy as a last resort -- after having sought peaceful, civic, alternative ways to negotiate themselves our of circumstances of poverty, instability, lawlessness, discrimination, corruption, state repression, and abuse.

We get to know these girls -- some of whom were as young as fifteen when they left.  They're from Tunisia, the UK, Germany, or Syria itself.   Moaveni isn't excusing anybody, but she is situating these young women in a wider context that cannot be ignored if we are to understand.  And if we refuse to take all of this into account and learn, then extremism is not going to end, because none of this happened in a vacuum, and the West had plenty to do with it.