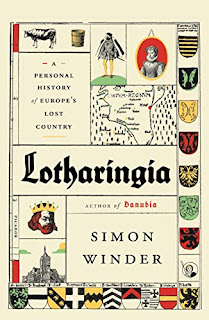 I have finished Simon Winder's fantastic trilogy about European history, and I love it so much that I will definitely be re-reading one of these days.  I previously read and wrote about Germania and Danubia with great joy.  Simon Winder is just right up my alley -- he pretty much just goes out and frolics around barefoot through the meadows of central European history, and his enjoyment comes through beautifully.  He knows that it's impossible to get a real handle on a thousand years or so of matter, and so he picks and chooses his favorite bits, and we just come along for the ride.

Lotharingia is about the much-fought-over stripe of Europe that covers eastern France, western Germany, some of Belgium and the Netherlands, and Luxembourg.  It ends where Switzerland starts, pretty much.  Charlemagne's heirs divided the massive empire into three parts and Lotharingia was the middle part.  It contains such famously contested areas as Alsace, Lorraine, the Saarland, Liège and Mons and Ypres.  Its major rivers are the Meuse and the Rhine. 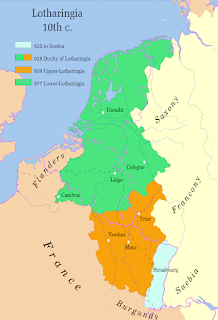 Winder goes through chronologically, mostly, starting with Charlemagne and ending with the end of WWII, but of course the 1940s have to be skimmed.  Even WWI has to be severely cherry-picked for one chapter's worth of material.  Winder spends most of his time in Lotharingia pre-1870, and the closer he gets to the present, the more he has to focus on the endless rivalry between France and Germany, and their many, many wars.

What it comes down to is that Simon Winder is just a guy after my own heart.  Given the chance, I'd love to wander around random European towns and investigate their nooks and crannies, and then meditate on the dangers of nationalism.   I have compared Winder with Bill Bryson before, but (just to repeat myself) I truly believe that Winder makes a much better Bryson than Bryson does.  Bill Bryson turns grumpy and whiny, and talks too much about himself; at his very best, he isn't as much fun as Winder is on any random page.  It's my opinion that the world should be much more interested in my guy.

I learned many fun facts from this book, such as where the trenches of WWI ended and that once upon a time, you could actually pan gold from the Rhine.   That's what Rhinegold was in the Nibelungenlied.  I added to my TBR list with entertaining memoirs and a book about Tintin, I discovered a few new-to-me artists, and I learned that everybody should watch the four-hour-long 1924 silent film of the Nibelungenlied by Fritz Lang.  I am halfway through it.  It's on YouTube.  And my goodness, I sure would love to visit all of these places!  It's like what Twoflower says in The Color of Magic:

“Sometimes I think a man could wander across the disc all his life and not see everything there is to see,' said Twoflower. 'And now it seems there are lots of other worlds as well. When I think I might die without seeing a hundredth of all there is to see it makes me feel,' he paused, then added, 'well, humble, I suppose. And very angry, of course.”

And here is the traditional selection of quotations:

But the real surprise is in the crypt, where there are truly weird decorative uses for Theban Legion relics, including a group of three skulls arranged in a tightly packed row, which have a disturbing resemblance to a doo-wop trio, with the smallest skull in the middle being that of the cheeky falsetto.

The suggestion that some courts -- what with feuding, hunting, duelling, and war -- must have at times consisted mostly of widows and nuns seems not implausible.

German nationalist historians of the 19th century were obsessed by a sense of shame that it was the fate of German-speakers to live for centuries in a fractured mass of small and medium states, in shameful contrast to the more powerful and unified states of England and France.

We are so used to thinking of the Middle Ages in terms of men covered in sheets of metal clopping about on horses and hitting one another, whereas the true image of the period should be a monk writing....the work of the monks has survived in everything we think, know and believe.

These sorts of initiatives are characteristic of what was in many ways one of the most exciting, cheerful and entertaining periods in all European history.  As usual we could tut-tut about life expectancy, poor hygiene and the relentless grind of agricultural labour, but this is just to buy into the patronizing and intellectually null idea that, in effect, the entire prior sum of human activity across the planet should be pitied and disregarded for not having had access to broadband.

He was shortly thereafter assassinated in the Hague with a poisoned prayer book (yes, really -- nothing can beat the 15th century).

[Hieronymus] Bosch designed floats for the town's Lenten parade which, it must be safe to assume, would have been totally fantastic and perhaps the best floats ever made, but which are completely unrecorded.

William the Silent was desperate for allies and there were numerous, inconclusive talks with Protestant states.  Elizabeth shared the problem of all European royalty that the Dutch were, however agreeable, just rebels.  There was no clear means by which such a novelty could be recognized.  The only other case -- the Swiss cantons -- was dealt with by pretending they were not there.

[on guilds] Gunners and printers were also traditionally footloose, going wherever somebody needed to be shot or better informed.

...I have now completed the long-standing dream of collecting all the Habsburg imperial tombs.

Ever since I can remember I have hated Louis XIV.

One great oddity is that back in 1873 the French government objected to Napoleon III being buried on British soil -- but for obvious reason did not want the body returned to become yet another revanchist focus.  The ingenious -- albeit insane -- decision was taken to import neutral Swiss soil to form a layer under Napoleon's coffin.

Man, I just loved this book.  I sure hope Simon Winder will come out with more books.  I know these took half a lifetime to produce, though, and I gather he mostly works in publishing.