Notes on a Silencing 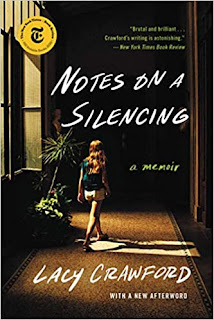 Notes on a Silencing: A Memoir, by Lacy Crawford

Lacy Crawford is about the same age as I am, a year or so younger.  She came from a semi-privileged background and her parents very much wanted to send her to a prep school and an Ivy League college, so at 14, off she went to St. Paul's, a very elite boarding school.  In this memoir, which loops back and forth through her memories, she chronicles her experiences -- finding her place, enjoying sports and friends -- and then the devastating assault from two 18-year-old boys when she was 15.  They bragged about what they'd done, and soon Lacy was not only traumatized and ashamed, she was a social pariah.  And then she got sick.

What Crawford wants to talk about, however, is not so much the attack -- awful as it was, it is also not unusual as these things go, and she is careful to say so.  What really did the job on her, and countless other young students, was the school's reaction.  Faced with undeniable evidence that a young girl had been assaulted by (legal) adults, who had given her an infection, they proceeded to cover everything up.  When she finally told her parents what had happened, the men running the school blamed and threatened her.  They knew medical information that she didn't know herself, and they made it into gossip.  They set out to crush her rather than deal honestly with what two boys had done.

Years later, Crawford found out that an investigation was being opened on the school.  She was by no means the only one who had been threatened into silence; many students, both girls and boys, had fallen victim to the same powerful administrators.  Her case, with its suppression of clear medical evidence, seemed to offer prosecutors a good opportunity to prove what had gone on.  It looked like it would really happen this time.  And then, power won again.  Everything was settled, no accounting made.  And Crawford realized that she would have to tell her story, just to let others know.  She says:

I think for a long time, we've tried to help survivors of violence of all kinds by asking them to change how they feel about themselves. What we've been missing - or at least I was missing - is to show them the forces that are arrayed against them and that are, in fact, asking them to carry that responsibility and carry that shame. I want all of the girls and women who have ever been made to carry the blame for the aggression of men, the aggression of others - I wanted them to see that they were intended to carry that blame and that it was never theirs.

Crawford tells her story clearly, without sentiment, with compassion for the girl she was.  She asks us all to step up and bear witness to suffering and violence, and not to look away or let those in power pretend that all is well.  Her writing is amazing, and I was especially affected by how well she describes her own naivete and essential innocence.  She didn't have a clue or a suspicion; she was totally without defenses against the power of others.  And that seems to me to be the natural state of a young teenage girl; in a healthy environment, absent factors to take it away, your average young teen girl is heartbreakingly, terrifyingly innocent, and far too many (I should think most) aren't allowed to grow naturally.  (Maybe boys too, but I don't know about them.)

If you've ever asked why victims of assault so often don't come forward, this memoir is a very clear description of exactly why.  Here in 2021, we like to think that we listen, but I'm not sure that's very true.  And, as she points out, the kind of thing that happened to her is not at all unusual.  She wasn't special in any way.  And so she asks: "what telling of a survivor's story will finally force a remedy?"