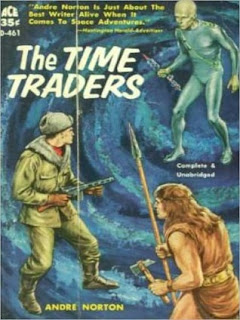 The Time Traders, by Andre Norton

As we found out last year, I am pathetically ignorant of Andre Nortons's works.  I didn't know what the Time Traders were or anything; I just had this book.  I lucked out -- this is the first volume in a long series of time-travel intrigue books!   It was published in 1958.

Ross Murdock, hardened juvenile delinquent, figures he can outsmart anybody, but he got caught this time.  To his surprise, the judge offers him a choice: jail time or volunteering to be part of a government experiment of some kind.  Ross picks the mystery experiment, assuming he can easily escape.  But the next thing he knows, he's in the Arctic, living on a base and learning new skills.  What are these people even up to, anyway?

Ross discovers that time travel is possible, and that the US is playing a giant game of spot-the-spy-bases all over pre-history.  The Soviets are up to something, and they want to find out what it is.  So Ross becomes a Bronze Age trader, posing as a Beaker man -- who has freedom to wander around.  Bronze Age life, with spies and proto-Vikings and Arctic bases and ....aliens?? proves to be exciting and difficult enough to humble even a cocky punk like Ross.

This was so much fun.  I want to read the rest of this series!  It is kind of bonkers.  Great stuff.

A funny thing is that the antagonists are the Soviets, who have found some sort of technology that the US wants too.  They're never, ever called Soviets or Russians though; they're always the Reds.  Then there are the other antagonists, the aliens whose tech the Soviets have been plundering.  They're not too thrilled either, but they're still a mystery.

NB: The Kindle edition in the link is really the first two volumes together, and I only have the first one.  Also, Norton apparently edited the story in 2000 to bring it up to speed, so I'd like to check that out too!